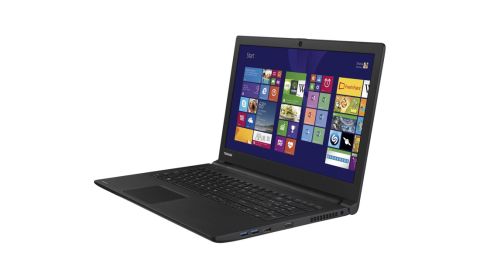 It's got good ergonomics, build quality and value, but the poor screen and mediocre specification hamper the R50's appeal

Toshiba has become one of the biggest names in business laptops thanks to its wide range of effective, no-nonsense office systems, and its latest attempt to nail the ideal corporate portable comes from the Satellite Pro R50-B-12U.

The R50 is cheaper than both rivals, and its 0.94-inch (24mm) body still competes: that's the same thickness as HP's hybrid, and not far off the 0.8-inch (20mm) frame of the Dell laptop. The Toshiba's 5.07 pound (2.3kg) weight is reasonable, too; a mite less than the HP, and lighter than the 5.73 pound (2.6kg) Inspiron. These are important factors when using this machine on the road, as it won't take up too much room in a bag – and it won't weigh it down unnecessarily, either.

Build quality hasn't suffered despite those dimensions. The underside and wrist-rest barely budged despite presses and prods, and the screen didn't twist much. It's a better bet than the inconsistent HP, and it's as sturdy as the Dell. The strong chassis is enhanced by good connectivity, with two USB 3 ports, an SD card reader and a DVD writer around its edges – with the latter a feature not found on either of the R50's rivals.

It's good ergonomically, too. The keyboard is sensibly laid out with large keys and a numberpad, and the typing action is comfortable thanks to a consistent, light action and a solid base – we were quickly up to speed and using the Toshiba to type out long reports. The trackpad offers similar quality, with a smooth surface and a pair of snappy buttons.

Toshiba has spent money making the R50 slim and sturdy, but it's not spent much cash on design. The black plastic is decorated with barely-visible straight lines across the wrist-rest and lid, the keyboard is black, and the only bit of gleaming metal comes from a small Toshiba logo on the lid.

The Satellite Pro comes with two operating systems: Windows 7 Professional 64-bit is installed out of the box, and Windows 8.1 Pro 64-bit is included on a DVD. It's a generous extra, but the rest of the software is a mixed bag. McAfee's security suite produced numerous irritating pop-ups, and Internet Explorer is hampered by bookmarking tool Symbaloo. Elsewhere, Evernote, Spotify and Winzip could prove more useful.

It's worth bearing in mind that removing these added applications could improve performance: with the bloatware uninstalled, the R50's boot time improved from 47s to 27s.

The mid-range R50 doesn't have the most exciting specification. Its Core i5-4210U processor is clocked to 1.7GHz, and it's the same chip used inside HP's hybrid. It's one step behind the Dell, which deploys a Core i7-4500U chip.

Elsewhere, you'll have to rely on Intel's middling integrated graphics, and the chip is paired with 4GB of single-channel RAM and a sluggish 500GB, 5,400rpm hard disk.