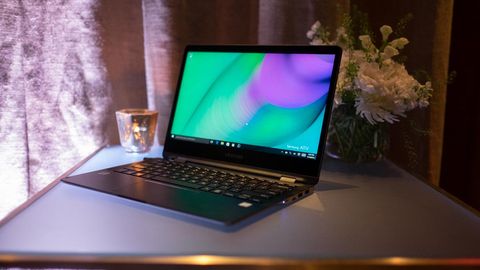 Lightweight, high in resolution and performance, Samsung's latest Ativ Book 9 Spin delivers on everything you want from an Ultrabook with an extra hybridization feature.

2015 might as well be the year of the 2-in-1 laptop with all the stunning new devices we're seeing, including the Surface Book and the HP Spectre x360. With that in mind, it seems fitting that Samsung has introduced its first ever convertible notebook, the Ativ Book 9 Spin.

The Spin isn't breaking new ground with a back-flipping screen that enables it to transform into tablet, but the head-spinningly thin frame is something you have to behold. Measuring just 0.59 inches (14.99mm), it's skinnier than most traditional laptops, besting even the 0.68-inch (17mm) MacBook Air in this regard.

In terms of weight, the Ativ Book 9 Spin is also 0.9 pounds lighter (weighing just 2.87 pounds or 1.3kg) than Apple's ultra-light laptop. And amazingly, it's able to do all this while sporting faster processors and a much higher-resolution display.

The Samsung Ativ Book 9 Spin is built like a razor, with a sharp front edge and made entirely out of aluminum. The shell has a dark blue, almost black, paint job that helps moderate the brushed finish's tendency to pick up fingerprints. Still, you'll find yourself wiping down this machine often.

Overall, the 13.3-inch laptop follows the Ativ design aesthetic set by the Ativ Book 9 before it, and the 2014 model before that. If you never attempted to tilt the screen past 130 degrees you'd never guess it was a convertible laptop - and that's a good thing.

Just below the screen there's an extra flap of metal that creates a solid transition between the screen and the keyboard deck by drooping over the gap between the laptop's two sections. When the screen is folded back, this same aluminum offshoot can be used as a small hand grip to help you hold up the 13-inch tablet.

Unfortunately, due to this design you'll invariably end up mashing on the Spin's keys while toting the device around as a slate. However, it feels like it's sturdy enough to take the punishment.

The 13-inch convertible is also perfectly usable as a regular laptop. The trackpad literally spans across the bottom two-thirds of the device: meanwhile, the keyboard stretches over the entire width of the device with spacious island keys.

The only thing not to like is that the keys offer only about 2mm of travel, while feeling a bit too mushy for a satisfying typing experience.

One for resolution lovers

The other big change is the QHD+ screen. Samsung's Ativ has been steadily bumping up in resolution with each iteration, and this year it finally returns to its previous 3,200 x 1,800-pixel glory.

Aside from completely one-upping the 1,440 x 900 MacBook Air, the high-res screen is an absolute necessity for viewing 4K video content. Even with non-ultra high-definition content, the screen makes everything pop thanks to its ability to produce stunningly vibrant colors.

Years ago the Samsung Ativ Book 9 Plus sported the same QHD+ resolution, but Samsung slipped back to full HD panels to extend battery life. Now, thanks to Intel's much more efficient and smaller Skylake processor, this latest addition to the Ativ line should deliver up to 7.3 hours of battery life.

A fair price for the high-end

Internally, the Spin specifically comes sporting a 2.5GHz Intel i7-6500U processor with 8GB of RAM and a 256GB SSD. It's all standard fare for a 13-inch convertible laptop in every regard except for price, and this little beauty will ring you up for $1,399 (about £919, AU$1,958) when it releases later this month.

Unfortunately, Samsung hasn't announced any lower-end configurations, so if you like the Book 9 Spin's design you'll have to pay top dollar to get it.