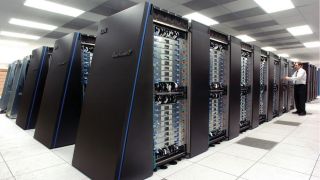 Will we reach a point when machine intelligence will overtake human intelligence? (Credit: IBM)

Defined as the point where computers become more intelligent than humans and where human intelligence can be digitally stored, Singularity hasn't happened yet. First theorised by mathematician John von Neumann in the 1950s, the 'Singularitarian Immortalist' (and Director of Engineering at Google) Ray Kurzweil thinks that by 2045, machine intelligence will be infinitely more powerful than all human intelligence combined, and that technological development will be taken over by the machines.

"There will be no distinction, post-Singularity, between human and machine or between physical and virtual reality," he writes in his book 'The Singularity Is Near'. But – 2045? Are we really that close?

Moore's Law states that computer processing power will double every 18 months, which is a thousand-fold increase every decade. Is Singularity really so unbelievable? What started early in the 20th century with the development of the Monroe mechanical calculator has gone on a journey via innovations like massive parallelism (the use of multiple processors or computers to perform computations) and supercomputer clusters, cloud computing, personal assistants like Siri and artificial intelligence like Watson and Deep Blue. The law of accelerating returns is in full swing.

What is cognitive computing?

We're already in the era of cognitive hardware and brain-inspired architecture. IBM's latest cognitive chip, the postage stamp-sized SyNAPSE, is a new kind of computer that eschews maths and logic for more humanlike skills such as recognising images and patterns, the latter crucial for understanding human conversations.

It's powered by one million neurons, 256 million synapses and 5.4 billion transistors, and has an on-chip network of 4,096 neurosynaptic cores. It's a low-power supercomputer that only operates when it needs to and, crucially, has sensory capabilities – it's aware of its surroundings. This digital 'brain' is the latest step in artificial intelligence that could be used in robots, futuristic driverless cars, drones, digital doctors and all kinds of responsive infrastructure.

But aren't there innately human skills, such as being able to tell when someone is lying? A study last March by the University of California San Diego and the University of Toronto found that a computer can spot false faces better than people.

What does Singularity have to do with artificial intelligence?

However, AI is only one piece of the jigsaw. "Artificial intelligence refers more narrowly to a branch of computer science that had its heyday in the 90s," says Sean Owen, Director of Data Science at Cloudera, who makes a distinction between game-playing, expert systems, robotics and computer vision, and machine learning, which has most of the focus today. "I do think the classic topics of AI are making a comeback, especially robotics."

"AI technologies like Siri, Watson, and Deep Blue are a step towards Singularity," says Owen. "If Singularity is about technology making qualitative change in how we live, there is evidence that some basic sci-fi has already landed – for example you can talk to your phone or car."

Although it's important not to confuse AI with Singularity, it will play a decisive role in machines learning new tasks and becoming more humanlike. Cue the famous Turing Test, as set out by Alan Turing, the pioneering British computer scientist and code-breaker.

"The Turing Test is a test of a machine's ability to exhibit intelligent behaviour equivalent to, or indistinguishable from, that of an actual human," says Curran. "In the original illustrative example, a human judge engages in a natural language conversation with a human and a machine designed to generate performance indistinguishable from that of a human being. All participants are separated from one another. If the judge cannot reliably tell the machine from the human, the machine is said to have passed the test."