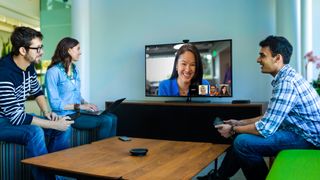 Meetings are the lifeblood of every organisation. They are the nexus point where participants can come together, each with their own contribution to make, and deliver something special as a team.

Where individual contributions become greater than the sum of their parts, and solo voices become a choir. If meetings really are the lifeblood, why is that blood stream so clogged up?

Let's face it: everyone in every walk of life has at some point looked at their calendars and shuddered at the prospect of a meeting that has to be sat through.

Meetings should be engaging, involving, your chance to play your part in furthering the success of your organisation but in reality, people fear that meetings will be tedious. People are convinced that they are going to take too long.

Participants in meetings feel that being there with their colleagues is actually keeping them away from doing something more productive and most of all, people really, really hope they're not going to be asked to be present!

In January, Sharp carried out research on workplace meetings with 2,163 office workers, split between UK, Spain, Sweden, Germany, France and Netherlands. The results make for depressing reading and confirm the importance of facing up to the problem.

Some 86% of respondents say they spend up to five hours a week in meetings, but 11% reckon that number can be as high as ten hours.

Given that this is a sizeable chunk of time out of a working week - more than half a day - it is clearly important that such meetings deliver value and add to the productivity of the organisation.

The bad news is: for most people, they just don't!

Only 16% of people would describe the meetings they have at work as "inspiring" while 79% of workers would rather be somewhere else where they believe they would be more productive.

In fact, 10% of people have found some meetings so tedious that they have invented a reason to get up and leave the room.

Among those who have stuck it out, there's no reason to believe that they're actually paying attention and focusing their minds on the matter at hand.

A third of us spend between 25-50% of the time that they are supposed to be watching a presentation thinking about something else while 12% actually spend almost all - 75-100% - of the presentation with their mind elsewhere.

But at least they're paying attention some of the time - unlike the 9% of respondents who will admit to having fallen asleep during a work presentation.

Given human nature, it's tempting to wonder just how many more really have but are not prepared to admit it. At least a third of respondents reckon they have spotted someone else nodding off!

There are a number of things that cause people to switch off when they're watching a presentation.

These are the top three complaints.

So how can an organisation resolve this current disillusionment with the meetings process?

Some points should be relatively simple to address, but do require presenters to admit to shortcomings in their own approach and delivery.

For example, if the top complaint is that meetings are too long, then they must be shortened. But that demands better agenda management on the part of the meeting organiser and a refusal to let presenters outstay their welcome.

If a presenter or the content is not felt to be inspiring, that's a more difficult one. Coaching and presentational training could be obtained of course. (It's interesting to note that nearly three quarters of respondents have been given no training on how to run a meeting successfully. Lack of investment in this respect appears to be paying its own sorry dividends.)

Training issues aside, it's clear that having better tools to support content delivery would make a positive contribution to addressing many issues surrounding the inability to hold the audience's attention.

If a meeting is conducted with a presenter, a slide deck and a flip chart at the front of the room, it's starting from a low base to begin with. Nor does the use of a simple laptop plugged into a projector meet the demands of respondents. It requires setting up, it's difficult to use and inevitably there's always a cable missing that delays proceedings and increases the boredom levels.

In an age of social media, multimedia and tablet computing, any audience expects more when it comes to receiving and retaining information.

Sharp's BIG PAD technology is an example of technology helping organisations to overcome 'mundane meeting' syndrome, allowing groups to collaborate on ideas in meetings and speeding up tasks which require input from multiple people, by using one interactive whiteboard.