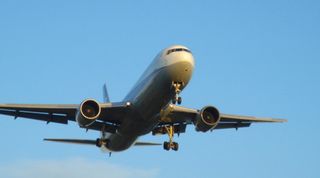 Google take to the skies with Ryanair deal

Ryanair's chief executive Michael O'Leary has revealed that the low cost airline is working on a partnership with Google, which will allow users to compare flight prices directly from the search engine.

The new project is expected to go live in Spring 2014 and will "completely change the way people search and buy for tickets" O'Leary claimed, before adding that it would blow comparison sites out the water.

Google Flight Search has been around since the company acquired ITA in 2011 and launched in Europe March 2013. But with the service missing low-cost airlines such as Ryanair, EasyJet and FlyBe it has failed to make much progress.

Google is not seeking any financial input from Ryanair to fund the price-comparison project, but they do want data.

Competing with many of the organisations it serves, Google's new service may cause some consternation from sites that provide similar online travel and flight-comparisons - which rely on Google AdWords to drive traffic.

O'Leary said: "There are some very exciting developments with Google, where we have been working with them on sharing the pricing. We'll be sharing the Ryanair pricing through all of the Google outlets, so when you go in, there'll be route selections, cheapest prices and so on. Google are developing a price-comparison thing themselves."

The maverick airline boss also said Ryanair's move to soften its image and relax some of its less popular rules was part of a strategy to capture new passengers.

"We own the 81 million price-sensitive people or people who live around our airports in Europe, so we now have to go after the 20 million or 30 million people, the people who'd say, 'I'd rather pay €20 or €30 more to fly Aer Lingus,'" he added.