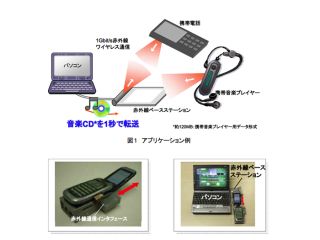 The Japanese plan is for IR transfers to mobile devices from PCs in an instant.

Anyone remember the days before Bluetooth and Wi-Fi when we actually used those little dark plastic infrared windows on our phones and other gadgets? If you do you'll also recall that IR transfers were horribly slow and prone to failure, so it's intriguing to hear that a Japanese firm has upgraded the invisible light technology to make it fit for the modern wireless age.

According to KDDI R&D Laboratories, its new technique [Japanese; PDF] ups the IR transfer speed to 1Gbit/s, which is 250 times the old theoretical limit of 4Mbit/s. Not only that, it has added a layer of stability that should eliminate those old scenes where would-be IR exchangers ended up saying "Oh screw this - just tell me your number instead."

The new IR method relies on swapping the old LED for a new semiconductor laser that can 'blink' far faster than any diode (think of a super-fast semaphore lamp). Throw in a chunk of nonvolatile memory for storing data during transfers and Bob's your high-speed data-chucking uncle.

KDDI suggests the new infrared technology could be used in PCs and mobile devices, particularly phones. If its claims of transferring a full CD of music in under a second prove accurate, then we're looking a seriously useful revival of some old gadgetry.