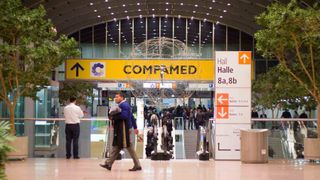 Upcoming trends for 2015 were showcased at Compamed

Medical technology (MedTech) is one of the world's fastest growing industries, and the latest and most exciting innovations were recently explored at Compamed, the international medical trade show which took place at the close of last year.

However, there were a few innovations that really stood out, which we'll focus on in this article, including shrinking devices and biologically responsive materials.

1. Power and energy requirements on the rise for portable battery-powered MedTech devices

The last decade has witnessed rapid innovation in the medical market. Devices have become smaller and as a result, smarter and more intricate components are increasingly in demand. However, there is now an increased demand for mobile technology used in hospitals and in the field, including acute ventilators, portable anaesthesia workstations and intra-oral scanners.

This year, we will see a trend for portable battery-powered medical devices delivering high power discharge from batteries with high energy densities, used in mobile hospital setups and by the emergency services.

2. Security in MedTech is a concern for OEM brands and reputations

Copycat batteries are now available at the click of a button. These often grey market and sometimes outright illegally produced knockoffs are now spreading via improved logistics and global supply chain networks. The problem is that copycat batteries often mimic big name brands but lack the certification, testing and even vital circuitry that protects lithium-ion (Li-ion) batteries from unpredictable failure, overheating and potentially exploding.

Battery original equipment manufacturers (OEMs) as well as consumer brands including Nokia and Kodak have already taken action to protect their lucrative aftermarket from reputational damage, by introducing security measures such as hologram labels and traceable invisible ink markings on devices.

2015 will see companies push further forwards in terms of securing their products. Some companies have already made headway into improved security by making a hardware-embedded software algorithm (SHA-1) available, which can identify and isolate fake batteries, stopping them from being used in critical-care devices. This also provides better batch traceability and deters fraudulent warranty claims.

Until now, the western world has dominated medical technology, with the majority of intellectual property belonging to European and North American companies. Lately there has been a power shift in the MedTech industry, and the Asian market, specifically China, is booming, with growth expected to continue over the next few years.

Thanks to a growing Chinese middle class there are hundreds of millions of new patients, creating a significant demand for high tech devices such as pacemakers, defibrillators and insulin pumps.

2015 will see European and North American MedTech OEMs begin to establish a more permanent presence in Asian and Far Eastern economies, aiming to secure and win market share of the premium industry sector.

4. Fringe technologies will start to be used in MedTech

Having already gained traction in the consumer electronics sector, wireless, or inductive charging to employ its full name, will begin trials in many MedTech devices this year. One of the vulnerable areas of rechargeable medical devices to date has been the connection made between the charging port and the mains AC power supply. This can be a source of ingress for dust and water as well as being a haven for bacterial growth.

2015 will see more medical OEMs explore the use of inductive charging to improve device IP (ingress protection) ratings. Introducing fully enclosed and waterproof designs will make it possible to sterilise devices in high pressure hospital autoclaves. The resultant lack of user-serviceable parts will further elongate device lifecycles by the implementation of a return-to-base repair strategy being adopted widely.

5. Anti-microbial surfaces provide an extra line of defence against superbugs

A World Health Organisation report released in April 2014 stated that: "This serious threat is no longer a prediction for the future; it is happening right now in every region of the world and has the potential to affect anyone, of any age, in any country. Antibiotic resistance – when bacteria change so antibiotics no longer work in people who need them to treat infections – is now a major threat to public health."

This year, we will see OEMs begin to widely consider the role of antimicrobial polymers and coatings for use in device mouldings, casings and on touchable surfaces, to minimise the spread of superbugs such as MRSA and other multidrug resistant (MDR) microorganisms.