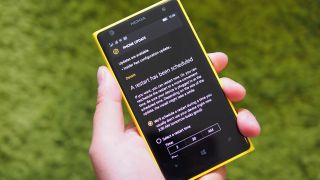 A new Windows 10 Mobile Insider Build is now available for Fast Ring Insiders. Build 10586 is a minor update over the previous build, which is a solid indication that we are on pace for the rumored Windows 10 Mobile unveiling in December.

Gabe Aul, Vice President of the Windows engineering team, teased the new Insider Build earlier today in a response to a question posed by one of his Twitter followers about today's "Build forecast."

"Sunny with a chance of Build," Aul responded.

The update comes 20 days after Microsoft made Windows 10 Mobile preview Build 10581 available. 10581 included several bug fixes and a few minor app updates. It also brought with it several lingering problems, such as the inability to set default save locations, and SD cards not appearing in folder trees. Both the save location and SD card issues have been resolved in Build 10586, according to a Microsoft statement.

Microsoft fixed several bugs with the new Build, including an issue with the Start menu issue that caused some interfaces to become corrupted upon upgrading. Apps and games should download with more reliability, and lingering issues with the physical camera button on your device should now be fixed.

Both the Skype and Messaging apps available on Windows 10 Mobile have received updates as well. However, it is immediately unclear what changes have been made.

Microsoft cautions Insiders to perform a backup of their phones before upgrading to Build 10586. This is necessary because a bug that emerged during the previous Build caused the phone's filesystems to become partially corrupted after users performed a factory reset. Those who performed the reset will likely notice after upgrading to Build 10586 that their phones go into a reboot loop after the upgrade completes, Microsoft said.

So when's it going to be?

Windows 10 Mobile was initially rumored to be made generally available in September, but several delays pushed the rumored release date to November.

However, recent reports indicate the operating system might not reach the masses until December.

This story is developing. We will update it as any new information becomes available.