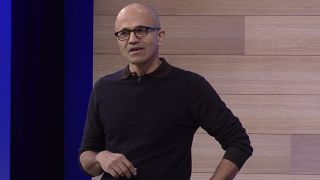 Nadella's push for an open architecture

Traditionally opposed to open-sourcing platforms, Microsoft has released .NET Core runtime for Linux and Mac users in a move designed to expand its developer network to coders who are more comfortable using other platforms. Now, developers can create cloud-based applications that can run across multiple platforms rather than requiring developers to choose between Linux, Mac and Windows.

Developers are encouraged to begin testing the new .NET framework so that Microsoft can start to weed out bugs and security holes.

Microsoft has updated its cloud solution include the Azure SQL Data Warehouse tool, which enables companies to isolate cloud-based relational data, and unstructured data. It has also added the Azure Data Lake, which is designed to let clients store what Microsoft is saying is an infinite amount of data in its original form. This lets companies analyze and process data from all sources (including machine-to-machine data) for analysis.

Microsoft also said Azure is available in 19 regions, on more than one million servers. Azure is onboarding more than 90,000 subscribers every month.

This all adds up to 50 trillion objects stored on the Microsoft cloud for more than 425 million users. Forty percent of Microsoft's Azure revenue comes from startups and ISPs.

As part of its open-source initiative, Microsoft has expanded its partnership with Docker to enable developers to open-source any Windows document and run it on the Docker platform.

Docker is an open platform for developers and system administrators to build applications. By furthering its partnership with Docker, Microsoft can now enable developers to mix and match Windows containers with Linux containers