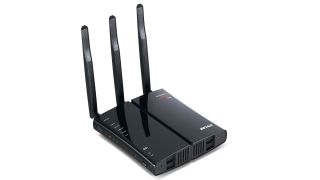 If you thought Wi-Fi couldn't get much faster than 802.11n, think again.

802.11ac is the latest evolution of Wi-Fi, and it should be particularly good for gaming and HD video streaming.

So how does it work, does it live up to the hype, and how long will you have to wait before you can get your hands on it? Let's find out.

Your 802.11ac speed could break the gigabit barrier

The fastest current 802.11n Wi-Fi connections max out at around 150Mbps with one antenna, 300Mbps with two and 450Mbps with three antennas. 802.11ac connections will be roughly three times faster - so that's 450Mbps, 900Mbps and 1.3Gbps respectively. Netgear, brilliantly, illustrates this with two pictures of motorways: the first picture, showing "Today's Wi-Fi", is normal, but the one labelled "3x speed with 802.11ac" is really blurry.

As with previous Wi-Fi standards, the speeds quoted on the box and in the promotional materials are theoretical maximums, not the speeds you'll actually get: so far devices with potential top speeds of 1.3Gbps have topped out at around 800Mbps. That's still blisteringly fast, of course, but there's still a gap between advertised speeds and real world ones. 802.11ac connection speeds will be reduced by numerous factors: network overhead, which is the chatter your hardware needs to keep the connection going; interference, congestion and physical obstacles; distance; the number of simultaneous connections; and whether the router is running in compatibility mode so that older wireless kit can still connect.

Because 802.11ac has bandwidth to spare, it should be great for HD video streaming and for gaming. According to Netgear [PDF], you can say bye-bye to buffering: "802.11ac will significantly enhance the user experience by improving the playback quality to any point throughout the house. With 802.11ac, for the first time wireless will provide similar performance as wired Gigabit connections."

To improve range and reliability, 802.11ac routers can use more antennas than existing 802.11n kit: your next router may have as many as eight antennas inside it.

802.11ac routers will use "beamforming" technology

Wi-Fi is omnidirectional, but 802.11ac routers will be able to use directional transmission and reception technology dubbed "beamforming". The router will be able to identify the rough location of the device it's talking to and strengthen the appropriate antenna(s) accordingly. The idea is to reduce interference.

Older wireless kit uses the 2.4GHz frequency band, which is fairly crowded: your kit is potentially sharing radio frequency with next door's baby monitor, your cordless phone and even your microwave. Like high performance 802.11n kit, 802.11ac routers will use the less cluttered 5GHz band where there's considerably more room for data transmission. 802.11ac hardware will use two kinds of channels in that range: 80GHz ones and 160GHz ones.

802.11ac routers will be backwards compatible

You won't need to throw out all your old wireless-capable kit as 802.11ac routers will be backwards compatible with your existing Wi-Fi kit. For example, at last year's CES Buffalo demonstrated an 802.11ac router that operated on both the 2.4GHz and 5GHz frequency bands and that promised to play nice with 802.11a, b, g and n hardware.

As with 802.11n, hardware is coming out before the 802.11ac standard is actually finalised. That's going to happen later this year, but manufacturers are readying their products now and they'll be everywhere by the summer, with minor software updates addressing any changes that might happen to the standard before it's finalised. We'd expect 802.11ac prices to be steep initially, as they were with the first 802.11n kit, but those prices should start to fall almost immediately.

The Institute of Electrical and Electronics Engineers (IEEE), the body in charge of the 802.11 standard, isn't skipping lots of letters: while major WiFi standards have jumped from 802.11n to 802.11ac, the IEEE didn't just skip 802.11o, p, q and so on. Successive versions of the 802.11 standard can also denote amendments to existing standards, so for example 802.11i introduced improved security and 802.11j introduced extensions for Japanese networks.

Liked this? Then check out Whatever happened to Wireless USB & HDMI?