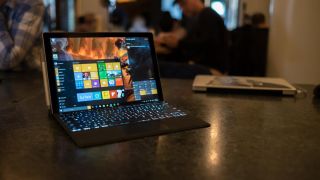 While both the Surface Pro 4 and Surface Book have received glowing reviews, there have also been widespread reports of problems with both Microsoft's new models, one of which is a major battery drain issue.

While there are always going to be teething problems with any new piece of hardware, battery life is such a key factor for any portable device, that to have it running out fast is very bad news – though according to a report from WinBeta, a culprit for this bugbear has been found.

It seems that Windows Hello – the biometric login system for Windows 10 – could be the root problem. One user on the Microsoft Answers forum documented a massive difference in the amount of standby time delivered by his Surface Pro 4 when Windows Hello was turned on.

With Windows Hello switched on, he got just five hours of connected standby, but with it off, that rose to 87 hours. That's quite a staggering difference. (Incidentally, if you want to see what difference it makes for you, then you can turn Windows Hello off under Settings, Accounts > Sign-in options).

Several users responded that they were having the same problem, with one writing: "Will someone from Microsoft please comment on how the devices were sold as having a sleep mode which does not work? It uses just as much battery while 'sleeping' as it does during use. Mine drains at over 10% per hour while asleep."

Doubtless if Windows Hello is the core issue here, we should see a fix from Microsoft pretty soon.

There's a long list of various reported issues with Microsoft's Surface Book, including random crashes and lock-ups, boot failures, driver errors, instances of the trackpad freezing and many more gremlins.