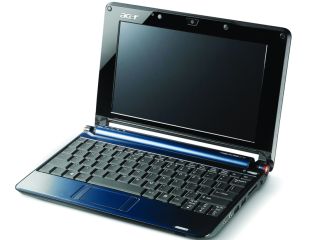 Is the Acer Aspire One better value than the Eee PC 900?

Acer is trying to spin a neat line in marketing with the launch of its Aspire One.

Even though it follows the brand name of its consumer notebook line, if Acer is to believed, this isn't actually a notebook.

Instead, Acer is calling it a 'two-handed internet device'. In reality, this spin detracts from the fact that Acer has put together a feature-rich mini-notebook in its own right.

The look is very much akin to what we've seen from Asus and MSI – a plastic chassis with a keyboard squeezed into a tiny casing.

To fit a decent keyboard, Acer has opted for a large bezel around the screen but you still get a standard 8.9-inch panel with 1024 x 600-pixel resolution.

Acer has followed the lead laid down by Asus and offered a Linux version to market first. The reason for this is clear: it's cheaper and easier to implement than Windows XP or Vista.

Acer has opted to use Linpus as its base OS and like Asus you'll find a tweaked interface that allows you to instantly see what applications you have access to.

Instead of separate windows for its tasks, Acer has opted for all features on one page with lesser tasks hidden away. While initially a good idea, it soon becomes rather awkward to use and what's worse, the interface doesn't really fill the 1024 x 600-pixel display and just sits in the middle of the display.

Worse still, in the sample we used, Acer had failed to fully integrate the media aspects that made the Asus Eee PC so easy to use. Hopefully this will be corrected by the time it ships as even loading a basic MP3 file is currently trickier than we'd like.

When it comes to making the most of the Linux OS, we feel that Asus still has the edge.

Like the MSI Wind U100, you'll find an Intel Atom N270 CPU powering the Aspire One. Unlike the Wind you won't find a fan in the Aspire, which means it doesn't stay as cool. It also means you won't be able to overclock the processor, a feature we really liked in the MSI

The Aspire One on the surface looks like the rest of the mini-notebooks we've seen of late but Acer has worked hard to bring a few unique touches to its device.

The basic model comes with 8GB of NAND Flash, which helps keep costs and space down. Acer has added a dedicated storage slot into which you can plug a SD HC card.

However, the way the OS handles this extra space is rather unique. Instead of treating your SD card as any other plug-in device, it simply gets handled as though it were permanent extra memory. This works fine until you want to swap cards as there is no real way of knowing what is stored on the card and what is on the internal Flash.

Acer plans to bring out a host of variants in the coming months. The Windows XP version will be first (£299 inc. VAT) and offers 80GB of hard drive space.

All models have a small, currently empty, mini-PCI bay inside, so there is scope for either a WiMax or 3G data card adapter to be added. Naturally, these will add to the initial cost but they will make the Acer Aspire One a far more appealing prospect.

We may have fallen for the Eee PC because it was cheap but it continued to stay appealing as the build quality was top notch.

So far, the Acer Aspire One has shown itself to be the most affordable mini-laptop on the market, but it lacks the usability and build to be the most compelling choice