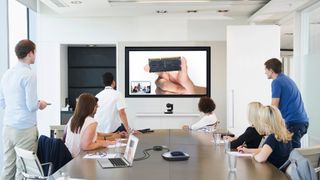 Beam me in, Scotty

Top-end video conferencing systems found in boardrooms often come with more screens and light dimmers than the Starship Enterprise, along with a galactic price tag to match.

Aiming to entice the market with an affordable solution, Logitech has outed the £699 (US$999/AUS$1324) ConferenceCam CC3000e, a video conferencing setup designed for teams of between six to 10 people.

The company claims that it can turn any small to medium-sized room into a video collaboration space due to its features and portable nature and is simple enough to be setup without IT support.

It features three main components: a 1080p HD videocamera, an NFC and Bluetooth-enabled speakerphone and a mains-powered hub that provides a positioning distance of up to 32 feet. There's also an infra-red remote for controlling the camera, which can be programmed to wake up at different angles to suit different rooms.

Other features include a 90-degree field of view with a 10x lossless zoom, a Zeiss-certified glass lens with a remote-controlled 260-degree pan, noise and echo cancellation, omni-directional stereo and a Kensington Security slot.

The hub connects to a laptop (Windows or Mac) via USB (2.0 or 3.0), meaning call video quality is determined by the internet line that connects to it. The camera itself supports H.264 scalable video coding, which automatically adjusts the resolution from 1080p to 720p in supported services such as Microsoft Lync.

The CC3000e is also certified for Cisco Jabber, WebEx, Skype and Vidyo. Logitech has designed it with interoperability in mind, so it'll also work with any application or cloud-based service (such as Google Hangouts) with USB plug-and-play support.

She said: "People want to replicate the experiences they have in consumer in business, so they want to use their mobile and have the same experience when they call their grandmother on Skype as when they come into a video conference. We also wanted to make everything simple to use and easy to setup without any help from IT."

The ConferenceCam CC3000e will be available globally from January 2014 via Logitech's partners.