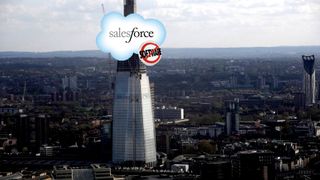 Towering above the competition?

It's been a busy week for CRM giant Salesforce.com, which has not only unveiled a new, feature-packed mobile app for its customers, it's also taken over London's Heron Tower, renaming it Salesforce Tower London in the process. Swish.

Imagine the bragging rights: "Do you have a tower in central London? A tall HQ? A mission base to show off your Executive Briefing Centre? Didn't think so, pal." Of course, Salesforce is a little more humble than that, as TechRadar Pro found out after a catch up with the company's EMEA SVP, Chris Ciauri.

Ciauri took us through the thinking behind the tower takeover, its upcoming UK and European data centre launches and how the company has managed to sustain its rapid growth since starting out 15 years ago.

TechRadar Pro: Why did you re-badge Heron Tower and what is it about London that appeals to the company?

Chris Ciauri: Innovation is in the company's cultural core, and we're the first technology company to put its name on a tower in central London. People have chosen different places to put their companies and we like to think out of the box. I think it's a statement to this market about how important and big the company is. We have a data centre coming to London too - the capital is our number two market in the world behind the US.

TRP: The tower will house an 'Executive Briefing Centre'. What's that?

CC: We have something similar in San Francisco - it's really a place where we can have our most modern technology that can help our customers re-imagine the way that they can connect with their customers.

I pick the word reimagine on purpose as I feel that's part of our role - we want to help them, based on the feedback that we're getting - to challenge themselves and think about doing different things. Like saying you can run your business phone your smartphone. It gives us the ability to bring European customers in and really showcase how we can help them change their business.

TRP: Why are you opening a data centre in the UK and additional ones across Europe?

CC: The statement there is really about growth. Historically our data centres have been in the US, and we're lucky to be in a position where we can now put data centres in the UK and Europe to continue and accelerate that growth.

TRP: Salesforce.com is 15 this year - what are the key elements that have driven that growth in that time?

CC: I think the company was dogmatic about changing the industry, so the question that was asked at the beginning by our founder Marc Benioff was whether we could make enterprise software as easy as buying a book on amazon.

It's simple stuff, but I think that vision has transformed an industry, and I think it's about that conviction to not veer off that model of saying, "there's a different way to do this, it should be fast, easy to use, scalable up and down, multi-tennant". It's about all of those concepts.

The second thing I'd say is to focus on the customer. In 15 years we've become the leader in the CRM, magic quadrant, sales service and marketing segments, and we've announced today we're the CRM leader in the UK, which is exciting.

Our focus is around CRM and helping our customers connect with their customers in new ways. We talk about new ways now, so now it's about social and mobile, whereas 10 years ago it was just making it easier to do that via the cloud. We put those three major trends together and I think that's what's done it.

TRP: The new Salesforce1 app is being presented as more of a fresh offering rather than an upgrade to the existing app. What was the thinking behind going for a revamp, and why should your customers download it in July?

CC: We announced Salesforce1 (the platform and application) last November at Dreamforce and relaunched it here in London this week. In the summer we'll have a second version of it. It's really just extending the functionality, but you're right - it's a rewrite of applications to make it API-first to help customers be able to run their business from their phone.

The convergence of social and mobile, and even connected devices, is where we see customers wanting to be. So we're helping our customers figure out that journey with their customers.

TRP: It's that idea that you can be playing Angry Birds on your iPhone one minute and driving sales leads the next...

CC: Absolutely. We're responding to the mix and the blend of the consumer side and the explosion you've seen there of apps. I think that's slower to come to the business world, but we certainly believe it's coming so we're making big bets.

I read something that I thought was pretty interesting. We did a study with the Economist that basically said that because of apps, people are 34% more productive. But 59% of employees say that their companies need to build more apps. So that tells us that we're just scratching the surface in terms of the kind of tools that we put in the hands of people, and there's a part we think Salesforce1 can play.

It's an app to be able to run Salesforce on your phone but it's also a platform to help customers build apps to appeal to the what you might call "frusted employee population". They're the ones asking why they can go fast in their personal life with their consumer apps but might only have Salesforce and Workday or a few others on the business side.

TRP: How important will the API aspect be? Mulesoft has introduced a SAP connector for Salesforce1 - will it be the first of many?

CC: The answer is: hugely important. The concept of Salesforce1 was building it API first so that it's delivered with 10 times the amount of APIs that Salesforce had before, which is absolutely recognition that there's power in connections.

If we can help our customers connect the assets that they have in an efficient way, they'll get an exponential business benefit. And we see it across our customer base.

UK customers that have come onboard like Eurostar obviously have a lot of infrastructure. If we can help it be an agility layer for them and help them figure out apps and things like that, they could have an app strategy; there's so much benefit they can extract for their customers.

TRP: The new Salesforce1 mobile app is compatible with Samsung wearables. How is Salesforce planning to capture traction going on in the wearables market?

CC: I think that regardless of the initial device that we chose, we see is that there's going to be an explosion in terms of connected devices.

Six or 12 months ago nobody was having that conversation, whereas now everyone's imaging that conversation. I think it's more metaphors at this point - you're choosing something to be able to go challenge a customer and say does that give you any ideas that would help you connect with your customers in new ways.