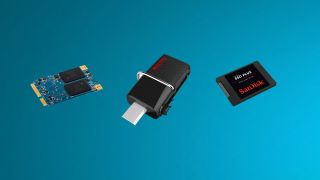 SanDisk has updated its flash storage and consumer solid state drive (SSD) products to help you more quickly transfer and save large amounts of data.

The SanDisk Ultra Dual USB Drive 3.0 is a USB flash drive that lets Android users transfer files between phones, tablets and USB-enabled devices. Built with a micro-USB and USB 3.0 connector, the device can transfer data at 130MB per second.

SanDisk also unveiled a 2.5" entry-level drive called the SanDisk SSD Plus for laptop and desktop users who need more space. The SSD Plus is designed to deliver faster boot and load times in addition to providing up to 512GB of added storage capacity.

SanDisk's new Ultra II mSATA SSD is for more advanced users who want to improve the performance of mSATA-enabled notebooks and tablets by boosting data transfer speeds up to 550MB per second.