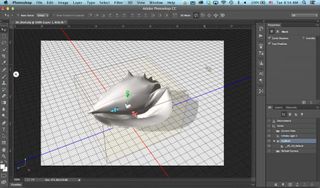 The 3D-printed clamshell revolution is coming

Adobe has crashed the 3D printing party with the latest update to its cloud-based Photoshop CC app, which can now help you print anything from rockets to seashells and, erm, horse pictures. If that doesn't make you want to saddle up and ride off into the 3D printing sunset, we're not sure what will.

The new features are based primarily around manipulating 3D models and making them fit for printing, rather than creating projects from scratch.

Once loaded into the app's WIZIWIG interface, models can be colored and textured before being printed by clicking a button in the app's menu. The idea is that if you can get something looking like you want on the screen, that's how it will look when it comes off the printer.

During an online product demo, an Adobe spokesperson said that Photoshop CC can print from a variety of sources, including a local computer, online print services such as Shapeways or through Adobe's own Behance portfolio. Printers initially supported include the Makerbot, the Cube and Z Corporation models.

Adobe reckons its first effort at supporting 3D printing already puts it ahead of competing 3D modelling and printing apps due to its ability to patch up flaws in the 3D meshes of products.

The spokesperson said: "Most importantly in terms of the pain points of 3D printing, Photoshop automatically corrects any problems with the meshes, whether it's holes or wall thickness problems, or they're not watertight, in addition to optimising support structures to ensure the printing happens reliably.

"The fact is that these problems exist for people trying to accomplish 3D printing, particularly creative types, creating a huge overhead. It may take many hours to fix the models and get them ready to print."

If you're thinking of giving Photoshop CC's 3D printing capabilties a spin, you'll have to sign up to one of Adobe's Creative Cloud suite offerings, which start at £17.58 (around US$29, or AUS$32) per month for a single app plan.