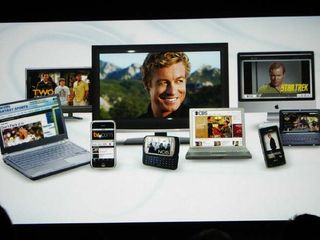 Intel wants to bring you TV on all your devices

The final day at the annual IDF techfest was all about fleshing out Intel's plans to get its chips inside your TV. Both Digital Home maestro Eric Kim and Chief Technology Officer Justin Ratner devoted their keynote swan songs to TV-based entertainment.

Hardware wise, the big news is the announcement of the Intel Atom Processor CE4100. It's Intel's second system-on-a-chip aimed at TVs, but the first to be based on the Atom architecture.

Atom core aside, it's a broadly similar design to the existing Pentium M-based CE3100.

However, Intel has cranked up the operating frequency of the chip's graphics core and added dual-stream 1080p decode support. The CE3100 only has the decoding chops to cope with a single 1080p stream.

Kim said the new Atom chip was just the beginning of Intel's new strategy to apply Moore's Law to the consumer electronics industry. Lest you have forgotten, Moore's Law is the observation that computer chips tend to double in complexity and power every couple of years.

Anywho, chips aside, the broader theme on the final day of IDF was that of a seamless TV experience across a wide range of devices and scenarios. In other words, watching TV on Intel-powered devices from TV and PCs to handhelds and everything in between.

As Ratner himself said, Intel foresees more than one TV-capable device "for every man and woman on the planet". That's an awful lot of chips, if Intel can pull it off.

To prove that it can, Kim wheeled out a succession of high profile partners. Cisco trumpeted its work with Intel in developing the monumental infrastructure required to pipe high quality TV content to the world via IP - AKA the internet.

Next up was Adobe. The shizzle here was the Open Screen project, an effort to deliver a consistent experience and user interface across multiple device types using Adobe's Flash platform. Think widgets, network-specific apps and web-powered social networking.

Then there was the BBC bigging up iPlayer and finally CBS's marketing chief George Schweitzer unveiling the new CBS Widget. It's designed to help viewers access CBS content in an increasingly competitive and fragmented market, and architected for Intel CE chips.

Is the future 3D?

As for Ratner, as ever his job was to look a little further out. Given the TV theme his focus was therefore on 3D TV.

To that end, IDF attendees were treated to a genuine novelty: a live 3D broadcast enabled by a new stereo camera technology.

While superficially fun, the demo did little to prove Intel or the industry at large has moved 3D beyond the status of crowd-pleasing gimmick. We're yet to be convinced any technology that requires the use of goofy glasses, gives half the audience a headache and reduces visual fidelity by several metrics is a clear step forward.