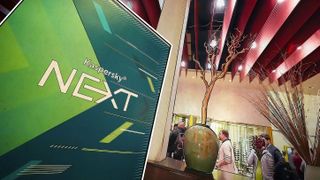 The world of cybersecurity is constantly evolving as cybercriminals exploit new vulnerabilities  and use new attack methods to target businesses, individuals and governments. Luckily though security researchers are constantly studying their tactics and devising new ways to prevent or stop these attacks before they cause catastrophic damage.

Kaspersky Labs is one of the companies working to make the internet a safer place. TechRadar Pro sat down with a spokesperson from the security firm to discuss the topics covered at this year’s Kaspersky NeXT event in Barcelona and to gain further insight on the latest cyber threats.

1. At last year's Kaspersky NeXT you covered blockchain, and how difficult it would be to visit Mars. What are some of the topics that were at this year's event?

This year’s Kaspersky NeXT event covered a wide range of future-looking topics around cybersecurity. Nicola Whiting discussed AI and what we’ve learned, from past failures to how to make future technologies greater. The combined panel of researchers from Kaspersky and Oxford University discussed hacking human memories, while Jane Frankland talked about how we can get more women into cybersecurity and why the industry desperately needs it.

There was also presentations from Kaspersky speakers on nation state espionage, industrial system attacks and how much your data is worth on the black market, as well as a panel debate on the price of privacy in the age of data promiscuity.

2. What are some of the ways that Kaspersky is helping to encourage women to pursue careers in cybersecurity?

We know that hiring is the first stage of ensuring an equal ratio, and that is just the first step. Retention of staff is extremely important too, so we want to ensure Kaspersky Lab is a company that everyone feels comfortable and confident working for.

Kaspersky has a number of current initiatives to support women internally - we have introduced a dedicated Women’s Network that pairs colleagues within a mentorship programme, and hold events where senior women share their experiences and offer upskilling sessions.

Externally, Kaspersky has partnered with a number of organisations which promote women in security such as #TechSheCan and Girls in Tech. We have also made a commitment to make sure that Kaspersky Lab events are more fairly proportioned, like Kaspersky Next which featured six female speakers to five male, and the Kaspersky Academy which looks to foster young female talent.

3. How do the tools used by everyday cybercriminals differ from those used by nation states? Could nation states soon develop their own APTs?

There is no easy way to see if your data has been leaked. What we can see is if you have had an account on a server or website that has been compromised.

If it has been, the hackers have most likely been able to find your username and password for that server or website, and if you use the same password anywhere else, it’s very likely that your other accounts have also been compromised.

5. Is the idea that hackers could one day target human memories a real possibility, or is it more in the realm of science fiction?

It’s a real possibility. The timing and the details are hypothetical, but the basic science for memory boosting implanting technology already exists. Anything that is connected or will be connected is going to be of interest to cyber attackers, sooner or later. The more the technology develops, so will the interest from cybercriminals.

6. What are the biggest threats to our digital privacy today?

One of the biggest threats is that we don’t really know what data is being stored, shared, exposed or even sold. People have given away a lot of our privacy, and we are forced to do so because most of the digital platforms today make money by using or analysing our behaviour and data.

The other side is that we as consumers, and users of the internet, don’t really know how to protect ourselves. We should be more aware of the security settings that we can enable, and how to use, for example, VPN and other mechanisms to minimise what we expose on the internet.

7. Besides attending the event in person, how else can IT professionals learn more about the discussions and presentations held at Kaspersky Next?

Follow our social media channels and the Kaspersky Daily Blog for updates.