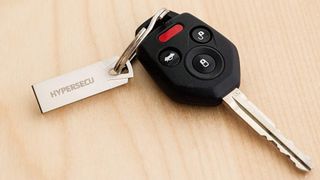 Read on for our detailed analysis of each device

When it comes to securing a personal or business device, the two-factor authentication (or 2FA) standard has become popular due to to social media, banking, and other consumer services using it for protection.

While app- or SMS-based 2FA is better than nothing – a physical hardware-based security key, which once inserted into a computer or mobile device grants the user instant access to services using a button or keypad – can offer a higher grade of security without waiting for a code to be beamed to a device.

Security keys are based on the FIDO U2F Open authentication standard. They’re inexpensive and available in a variety of connection types and standards including USB-A and USB-C, in addition to Bluetooth and NFC. Developed by Google and security company Yubico, U2F today protects a number of recognisable internet companies – including Facebook, Gmail, Dropbox. Github and Salesforce.com, in addition to the UK government.

While they’re undoubtedly dependable, not all security keys are created equal. Continue reading for our pick of the best security key to use in 2020.

Manufactured by Yubico, codeveloper of the FIDO U2F open authentication standard used by many security keys, the YubiKey 5 is in a safe pair of hands when it comes to securing your devices. As its name suggests, it works using USB-A (or USB-C using an adapter) or NFC and offers out-of-the-box compatibility with many services – including Google Chrome, Facebook, Dropbox, LastPass, 1Password and more. The YubiKey 5 is compact, durable, and light – and it’s even waterproof. Sporting a black-and-gold design, it’s one of the best security keys to show off attached to a keyring.

If you're looking for the best bang-for-buck in a security key, this model from Thetis should be high on your list. There’s no Bluetooth onboard (it’s available on a more expensive model), and it only supports the FIDO U2F standard – so there’s no UAF or OTP compatibility. However, it will provide secure access to websites so long as you’re using Chrome or Opera as a browser on Windows, macOS or Linux. Handily, this affordable security key sports a compact folding design with a rotating aluminum casing that prevents the connector from being exposed to potential damage while being transported.

While it's not the most affordable security key on this list, coming in at a higher price than Yubico’s USB-A and NFC-equipped version, this USB-C security key is essential for owners of Android devices. The 5C is compatible with a range of standards – including FIDO U2F, OTP, Smart Card and OpenPGP. That said, it lacks NFC, and it isn’t compatible with iPhone devices – you’ll need the Yubico 5Ci for that. This model, which is made in the USA, is durable-, water-, tamper- and crush-resistant, so it should survive any journey.

As its name suggests, OnlyKey has some nifty features its rivals lack. Thanks to an onboard keypad that can bypass keyloggers that find their way onto computers, it can keep online accounts safe in the event that a computer or website is compromised. It supports multiple methods of 2FA including FIDO 2 U2F, Yubico OTP, and TOTP. OnlyKey is also a password manager, and it offers features such as encrypted backup, self-destruct (which wipes the device after a certain number of incorrect attempts), and the ability to update the firmware in order to access new features. On the downside, its user interface is far from the prettiest we’ve ever seen.

The smallest USB security key around

If you are looking for the smallest security key around, this is it. The Yubico YubiKey 5 Nano is eclipsed by most coins and is inconspicuous when attached to a keyring. Its diminutive size comes at a cost, however, in that there is no NFC onboard, which is to be expected. This security key is FIDO 2 certified and supports a number of other protocols including FIDO U2F, Yubico OTP, OATH-TOTP, OATH-HOTP and OpenPGP. Perhaps the most novel use of the YubiKey 5 Nano is its ability to grant access to Twitter in an instant on a USB-A equipped laptop.

This security key from Qkey one-ups other offerings on this list by using three-factor, military-grade authentication security. This comes in the form of a physical security key with a security chip, in addition to a master password that gains access to the key, and a smart sensor that confirms the user is physically present. One boon that comes from using this uQontrol model is that it will secure any online site rather than ones that are specifically support, and you only have to enter your password once for added convenience.

The toughest security key around

If you are prioritising solid build quality above all else in your security key, this model from HyperFIDO is as tough as they come. It’s constructed with a near-indestructible titanium metal chassis that attaches to a keychain and features a single button and LED to indicate active status. It's also one of the more affordable hardware security keys around, and as such the K18 does not come with NFC. Also, it only offers support for the U2F protocol and FIDO 2, meaning UAF and OTP do not feature.

This one’s for iPhone users too

This model from Yubico is ideal if you are a user of (and looking to protect) both USB-C and Apple devices. The 5Ci is equipped with both Lightning and USB-C ports, which its maker claims is the first of its kind in a security key, and it’s a claim we can’t refute. It’s FIDO-compliant and works with applications on iOS, Windows, macOS and Linux, providing access to services such as Gmail, Facebook, Dropbox, Outlook, LastPass, Dashlane, and 1Password. While it’s more expensive than competing models, its versatility and multi-protocol support for FIDO2, FIDO U2F, Yubico OTP, OATH-TOHP, OATH-HOTP and OpenPGP makes it one of the most versatile and best security keys around.