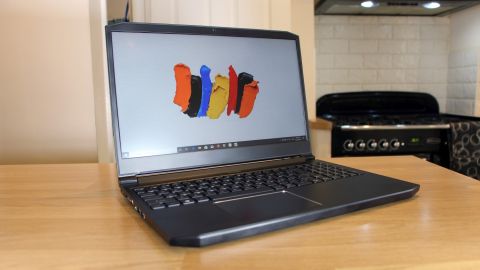 Here’s how the Acer ConceptD 5 Pro performed in our suite of benchmark tests:

It’s roughly level with the mobile GeForce RTX 2070 – but, because it’s a Quadro chip, it also has ISV certification.

The graphics core opened a convincing lead over the RTX 2060 included in the Asus. In 3D Mark Sky Diver the Acer ConceptD 5 Pro scored 30,913 points – more than 4,000 more than the Asus.

In the work-focused Cinebench OpenGL test the Acer rattled through at 185.89fps, which is miles beyond the Asus’ 122.22fps result. The MacBook Pro has weaker GPUs in all configurations.

It’s a huge amount of power, and it means the Acer will be able to handle photo-editing, video work and design tasks with aplomb.

The only thing that the Acer may struggle with is editing particularly demanding 4K video, but that’s it – and it’ll still handle that, albeit with a little slowdown. If you’re one of the few who does need more power, look for the Quadro RTX 4000 or 5000.

The Core i7-9750H is one of Intel’s recent high-end laptop chips, and it comes with six cores alongside base and boost clock speeds of 2.6GHz and 4.5GHz. And, because the Acer is a productivity machine, it comes with a mighty 32GB of memory.

In Geekbench’s single- and multi-core tests the Acer returned scores of 5,316 and 19,861. It’s enough power to handle photo or video editing tools without creating bottlenecks. Design applications will run smoothly, and it’ll cope well with multi-tasking.

BaThe Core i9-9980HK inside the Asus is more powerful – it’s about 10,000 points better in Geekbench’s multi-core test. If you’re running workstation-level software, then that’s more suitable. For the vast majority of mobile workers, though, Core i7 is ample.

The Acer’s boot drive is formed by two 512GB SSDs in RAID 0, which delivers 952GB of usable space. It returned read and write speeds of 3,516MB/s and 3,112MB/s, which are among the best you’ll find in any laptop.

Those speeds mean that applications and files load quickly, and that boot times are fast. The SSDs are paired with a 2TB hard disk, so you’ve got loads of space.

The Acer’s thermal performance is a little inconsistent. When the GPU is pushed hard, temperatures are fine, there’s no throttling, and noise levels are modest. However, running the CPU at 100% load saw the chip throttle to 2.4GH, and running a full-system stress-test throttled the CPU to 1.5GHz.

If you’re doing GPU-intensive work, the Acer will be fine – and it’ll be fine if you’re only pushing the CPU for shorter periods of time, or if you don’t need to run it at 100%.

However, if you want to push the CPU at maximum loads for long periods, the Acer isn’t suitable.

Also be aware that unplugging this machine restricts performance. With the laptop running on battery power, the Acer’s Geekbench scores dropped to 2,033 and 15,428 points – so don’t expect to handle tough work away from the mains.

Battery life is poor, which is no surprise from a slimmer machine with high-end components. In a work test with the screen at half brightness the Acer lasted for three hours and 20 minutes.

If you ramp up the screen and push the components harder, expect an hour to be slashed from that time.

Don’t expect to get a day of life out of this machine – in reality, you won’t make it to lunchtime.

Meanwhile, the laptop lasted for four hours and 27 minutes in a less-demanding video playback test with the screen at 50% brightness.

That’s a better result than the PCMark 8 home test, but it’s still below the five hours of the Asus Zenbook Duo and further behind the MacBook Pro.

The Acer still won’t handle half a day away from the mains, even if you’re very careful with screen brightness and applications used.”

The Acer ConceptD 5 Pro is supposed to be eye-catching on the outside, but its best attributes can be found beneath its magnesium alloy exterior.

The Quadro graphics chip, Core i7 CPU, lightning-fast SSD array and 32GB of memory will tackle virtually anything: high-end photo and design work and tough video-editing are all possible on this notebook. Only workstation-level tasks are beyond its components.

The screen is fantastic. The 4K resolution means crisp imagery, and quality is superb. This, again, is another component that can cope with tough design and photo tasks.

Elsewhere, there are inconsistencies. Battery life is poor, the CPU throttles when pushed, build quality and external design are suspect and the port selection could have been better.

The Acer arrives at a reasonable price considering the hardware on offer, though – it’s not unusual to have to pay more than £3,000 or $3,500 for this level of specification. It’s a bit rough around the edges, but the ConceptD 5 Pro is worth considering if pure computing power is more important.