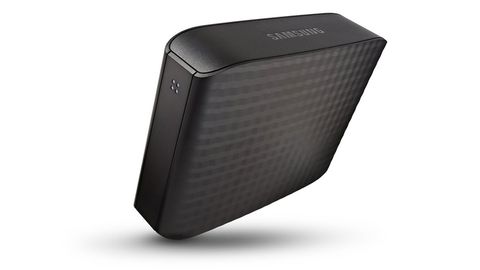 Plenty of storage for your money

The D3 Station is an understated, but reliable and solid drive for anyone who doesn't need standout performance, but who wants a convenient and inexpensive way of adding a large amount of additional storage to their setup.

The first thing to note about this desktop external drive is that it's a wolf in sheep's clothing, or more precisely, a Samsung-branded drive manufactured and distributed by Seagate. Available in 2TB or 3TB capacities, it has enough storage to satisfy the most demanding of users.

It's housed in a compact – but quite heavy – case with slight curved edges to avoid unflattering comparisons with a box. The USB and power connections are found at the back of the drive, and there are four bright activity lights at the front. While it feels quite chunky, the black plastic case is durable enough to handle the odd knock as well as repel light scratches.

The drive will work with both PCs and Macs, but is set up for use with PCs out of the box and formatted as a single NTFS drive. It comes with Samsung Drive Manager software that allows you to repartition the drive if you so wish, and offers a simple diagnostics tool, automatic backup software with password protection and a handy SecretZone app that allows you to encrypt part of the drive for storing sensitive files in. It's nice and simple to set up, with enough options to make it flexible, although we'd have liked to have been given some kind of choice over what encryption was applied.

The D3 Station is a solid, competent performer, although the early promise in the synthetic benchmarks, with peak read/write times of 216MB/s and 203MB/s respectively, aren't borne out in real-world tests. Here its performance is actually slightly worse than some portable drives we've tested, although the advantages of USB 3.0 over 2.0 are still obvious. The drive takes nearly 26 minutes to write a 36.5GB folder containing 60,000 files in our small files test, and just under 17 minutes to transfer a 54.8GB folder containing seven large files.

This is a solidly built, no-nonsense desktop drive, designed to sit alongside your PC or Mac and deliver all the backup and extra storage you could possibly need. And while the real-world performance isn't stellar, it's still on a par with most USB 3.0 drives out there. The robust casing – which doesn't get particularly hot even after a few hours of use – is also a plus point for those looking for something that won't scratch easily.

There's a lack of energy-saving features with the drive – it powers off with your computer or when the USB cable is removed, but powers on independently of it when you first flick the electricity switch. There also appears to be no means of putting the drive to sleep when it's not in use. The enclosure itself isn't serviceable, so you can't replace the drive easily should you later want to upgrade or renew it.

The D3 Station is an understated, but reliable and solid drive for anyone who doesn't need standout performance, but wants a convenient and inexpensive way of adding a large amount of additional storage to their setup.