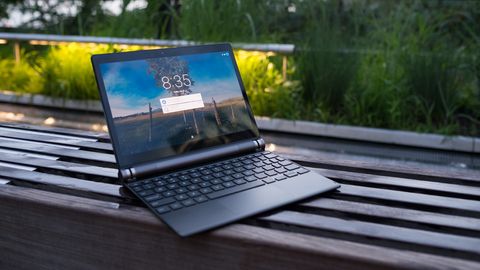 The Dell Venue 10 7000 is a great tablet that wants to get to work, but it's lacking in the memory department to deal with multitasking.

From the Nexus 9 to the Lenovo Yoga Tablet 2, there are have been many attempts to create a productivity-minded Android device. You can't blame manufacturers for trying. After all, the promise of a device that can be both your mobile movie screen and your on-the-go office is enticing.

It's hard to look at the Dell Venue 10 7000 and not immediately think that it's riffing a bit too much off of Lenovo's Yoga tablets. Between the thin screen and barrel hinge, the likeness between Lenovo and Dell's respective tablets is obvious.

That's not to say Dell's device is completely identical. Dell has added plenty of its own design touches – mostly from the Dell Venue 8 7000.

Like its smaller, 8-inch brother, the Venue 10 7000 is made with a thin aluminum frame. A cylindrical hinge also protrudes from both sides of the tablet, whereas the Yoga Tablet 2 features a completely flat face with a curvy backside and a flip-out kickstand built into its hinge.

Thankfully, that ergonomic, bar-shaped spine makes holding onto the tablet in either landscape or portrait orientation a cinch. This barrel-edge, as Dell calls it, also contains two massive speakers and the tablet's battery.

Unfortunately, Dell's 10.5-inch tablet does not come with a kickstand. Instead, the device all but requires an optional Venue Bluetooth keyboard accessory to prop it up before you can use it in any of the additional modes. The keyboard goes for $159 (£101, AU$215) if not picked up in the available bundle.

A keyboard to die for

Dell may have a keyboard accessory just like Lenovo's Yoga tablet line, but Dell has gone with a much stronger and more reliable locking system. Upon closer inspection of the barrel hinge, the tablet has a unique latching system that incorporates a deep channel lined with tiny metal, magnetic rods.

The Bluetooth keyboard in turn has corresponding metal clips that fit perfectly inside the barrel edge's channels while clipping into the mysterious metal rods. It's an intricate system you won't really pay any mind too, but it does an excellent job of keeping the keyboard attached snugly to the tablet.

In fact, the connection is so tight, you can give the slate a good shake while holding it up by the keyboard without worrying about the two ends splitting apart and flying away in disparate directions.

You also shouldn't expect to use the the Bluetooth keyboard when it isn't attached to the tablet, as it has no actual power supply of its own. Instead, it siphons power from the tablet through two tiny, gold-coated prongs built into the docking connectors. This begs the question: why is this a "wireless accessory" when it requires a physical connection to work?

Regardless of what connection technology the Venue keyboard uses, it offers up a surprisingly satisfying typing experience. Keys depress with a decent amount of travel and feel as punchy as any scissor switch you would find on a real laptop keyboard – and it even comes fully backlit.

While the keyboard has been shrunken to better fit the tablet's 10.5-inch form factor, the sacrifices haven't been too grave, save for an enter and backspace key that are a bit too short. I can easily type out a full-length article, including this review, on the Venue 10 7000.

Unfortunately, I don't have the same love for the trackpad, which constantly recognizes movement from the lower end of my palms as deliberate mouse movements. Android palm rejection software built into it but there's no way to dial the setting up, compared to Windows and Mac OS machines, and there aren't any Synaptics or other driver software to save the day.

The problem became so commonplace that I disabled the trackpad outright and stuck with prodding the touchscreen.

By far, one of the Venue 10's most lovely features is its OLED display. The 2,560 x 1,600 resolution makes everything look better from digital comics and websites to movies and YouTube videos.

In the resolution battle, the Dell's tablet packs 288 pixels per inch (ppi), easily out-sharpening the iPad Air 2 and its 264 ppi display. Dell's 10.5-inch slate also matches the pixel density of other flagship Android tablets, including the Nexus 9 and Samsung Galaxy Tab S. The Lenovo Yoga Tablet 2, meanwhile, lags behind, severely limited by its Full HD (1,920 x 1,080) display running at only 224 ppi.

More importantly, this slate simply looks better because it produces stunningly vibrant colors without any of the oversaturation that typically plagues OLED screens. At the same time, this organic display produces truer blacks than any LCD, which came in handy when bringing all the dark scenes in Game of Thrones to life.

Next Page Software and performance