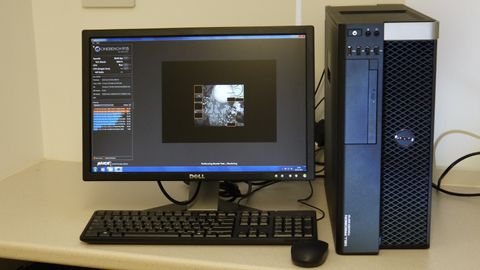 The Precision T5810 is an impressive and very usable system that delivers the performance needed by design and engineering professionals on a budget.

Following the standard workstation pattern, the T5810 is housed in a substantial yet compact black and silver tower which, thanks to a couple of design flourishes, manages to somehow look pretty stylish. Power comes from an externally removable 685W AC supply which has two fans built in for cooling with, on the review system, another built onto the video card. The end result was far from silent, but we'd still put it down at the quiet end of the scale for this type of system.

Designed to be customised, access is provided via a lift-off side panel with plenty of room to get to all the important bits and pieces. And that includes an all-new motherboard sporting a single socket for the Haswell-based Intel Xeon processor plus, of course, the latest C612 chipset required to manage it.

Processor-wise, the workstation we looked at was fitted with a Xeon E5-1620 v3 (it's the "v3" that signifies the Haswell architecture) clocked at 3.5GHz and delivering four cores/eight threads plus a decent 10MB of cache. A good starting point for buyers on a budget, this processor scored an impressive 14,656 when tested using Geekbench, compared to a baseline of just 2,500 for a 2.5Ghz Intel Core i5.

Moreover, those with extra cash to splash can opt for a number of alternatives both from the single-socket E5-1600 v3 family and the E5-2600 v3 line-up, more usually found in dual-socket configurations.

Some care is needed, however, as these processors can work out really expensive. Opt for the 2.6GHz Xeon E5-2697 v3, for example, and the core count rises to an impressive fourteen, but you have to pay an extra £1,700 (around $2,660, AU$3,200) to switch to this chip. That's money which may be better spent elsewhere such as adding more memory or upgrading the video solution, which we'll discuss shortly.

As far as memory is concerned support for the latest DDR4 technology is part of the Haswell update, with eight DIMM slots available on the T5810 motherboard to take up to 128GB, clocked at up to 2133MHz. Ours had a more modest 16GB of ECC-protected memory on-board which is, again, a reasonable starting point without costing the Earth. The DIMMs provided by Dell also left half the slots empty making later additions easy to accommodate.