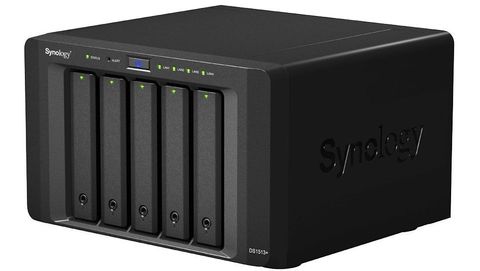 If you need a powerful, expandable network storage device with more features than usual, Synology'sDiskStation 1513+ has an impressive specification.

Five bays mean you can use RAID 6, so you won't be offline if one drive fails - and you won't lose data if a second drive fails while you're rebuilding the array (or you can stick to RAID 5 or RAID 1+0 if you don't want to sacrifice the extra disk space, or Synology's own HybridRAID for unmatched drive sizes; the choice is yours).

With six USB ports (two of them USB 3), two eSATA ports and four gigabit Ethernet ports, you can connect a lot of external storage, including daisy-chaining two DX513 units for a total 60TB of storage If you need fast file access, you can combine two ports for more bandwidth or use them for failover connections if you need to make sure your storage is always available.

There are even twin fans (in case one fails) and a Kensington lock so you can secure the DiskStation physically. You can also use those Ethernet ports for connecting IP cameras if you need to monitor your premises and the Atom CPU lets you run more demanding software such as blog servers, media streaming and even a VoIP server. But you'll need to be more of an expert in networking and storage than with most NAS devices to take full advantage of the DiskStation.

You can fit your hard drives without ever resorting to a screwdriver; the drive cages pull out and latch back into place, and the snap-mount drive rails hold 3.5" drives without screws (although you can also screw 2.5" drives in place). The Synologysoftware offers autodiscovery and management through the web interface, but getting the DiskStation 1513+ set up isn't nearly as foolproof as on NAS devices from manufacturers who concentrate more on the small business market.

If you're not used to the DiskStation hardware, it's possible to fit the drive cages back into the case so that the latch is closed but the drive is not in the correct position, and the deep power socket means you need the original power cable, and you have to make sure it's very firmly seated.

When you have the drives fitted, setup is done through the browser. Opening find.synology.com detects the NAS on your network (although it took longer than other discovery services we've tried) and you then have to accept the warning that any data on the drives will be deleted (twice, in fact).

Setup suggests downloading the latest software rather than booting from the version on the NAS; it's always worth having the most recent version, but it does mean you need to allow a little longer for setup - especially as the initial disk scrubbing and consistency check can take a couple of hours.

Many small business NAS devices turn on a lot of defaults and leave you to remove what you don't want; here, you have to specifically choose almost everything yourself. Having to set the password for the admin account is more secure than other systems that start you off with a default password many businesses will not bother to change.

You have to create your own shares to put files in, so you don't end up with a default set of folders for video and images you might never need. You also have to turn on file services if you want to access files through Explorer or the Mac Finder rather than through the File Station web interface (which works whether you're in the office or not) and, again, there is a rich set of options.

Synology has excellent mobile support for accessing files. The DS file app lets you browse and open files, including playing video, and the Ds audio app streams music. You can create playlists or use your phone as a remote control for playing music from the DiskStation, including through AirPlay. Both apps are available for iOS, Android and even Windows Phone, but the DS cloud sync app is Android and iOS only.

If you're familiar with Linux, you'll feel right at home, but the trend in NAS management for small businesses is towards simple and self-contained interfaces. The options and settings are powerful and give you a great deal of control, but you have to dig into a lot of panes, tabs and radio buttons to find them all, and controls are split between individual tools and the general control panel.

At least the interface does prompt you to start services like NFS if you try to change permissions, but novice administrators will be puzzled by options like changing the default read and write packet sizes when they really need to turn on Windows file services.

It's great to see support for options like Windows offline files, which normally require a Windows Server, as well as Mac options like Time Machine support and Bonjour printer broadcast but given how much faster SMB 2 is than SMB 1, it's disappointing that SMB 2 isn't enabled by default when you turn on the Windows file service.

Want to set up user accounts and email out the default passwords? You have to set up the email notification service and device if you want alerts about changes to the system via email, SMS, Skype or Windows. Those are really powerful options, but if you just want to get users set up and working, having to fill in the SMTP server and port you use for email before you configure individual privileges for each shared folder you've created is making things unnecessarily complex for the smaller office.

The DiskStation 1513+ is a powerful NAS device, in terms of performance and features. It's a solid, well-built, professional piece of kit that can stand up to the rigours of office life. Other NAS control panels don't offer you this level of configurability, but they don't make you do so much hard work either - or point at your own mail server to send user account details. For less demanding users it could be overkill, and if you're looking for something simpler to work with, there are cheaper, more approachable options.