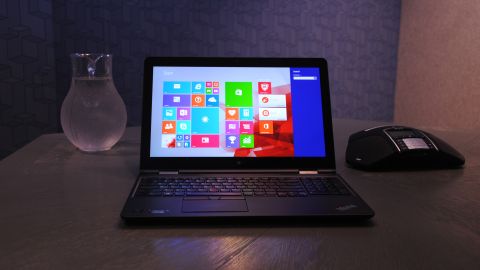 Although the Lenovo ThinkPad Yoga 15 is a solid laptop, its heft renders it a niche notebook that few will be able to comfortably use. However, if you're a business user that occasionally travels, and you need flexibility for presentations, this might be the perfect hybrid for you.

These days, if you're in the market for a home-use laptop, you're more than likely to purchase a convertible laptop-tablet hybrid. However, business users have been given very few solid convertible options from which to choose. Lenovo, the pioneer of the convertible space, has sought to remedy that with its ThinkPad Yoga line.

The newest edition to the lineup, the Lenovo ThinkPad Yoga 15 – starting at $929 (£598, AU$1,250) – offers the sturdiness and performance of a mobile workstation with the flexibility and style of devices like the Lenovo Yoga 3 Pro and the Microsoft Surface Pro 3.

However, because the ThinkPad 15 is bulkier and sturdier than its lighter and sexier counterparts, it's best compared to the HP Envy 15 x360, which features a similar convertible design. Not to mention the 15-inch MacBook Pro with Retina, which is the mack daddy of business class consumer laptops.

What you'll immediately love about the ThinkPad Yoga 15 is that it is capable of shifting between Laptop, Stand, Tablet and Tent modes, while automatically switching your system settings and locking your keyboard when necessary.

This means your screen can flip 360 degrees from closed to Tablet mode, and your hardware keyboard will deactivate in this mode so that you don't accidentally disrupt your navigation or content consumption.

Unfortunately, there aren't many use cases for a 5.1-pound (2.3kg) tablet. Although the laptop is thin, at just 0.8 inches (21mm), its bulk makes it somewhat clumsy when trying to flip the screen back and over. This isn't an issue if the notebook is sitting on a desk, but if you're standing, or using the laptop on your lap, you'll wish you had a smaller 11- or 13-inch device.

The two metal hinges connecting the display to the ThinkPad Yoga 15's base are incredibly sturdy. However, because the upper panel weighs so much, when you try to put the laptop in Tent or Display mode, the hinges give just a bit.

The laptop is built with a black magnesium-alloy frame and a plastic vent-heavy bottom plate. The top plate feels sturdy and is extremely resistant to scratches and dust. After more than a week of transporting the device from workspace to workspace, the device didn't accumulate one speck or scratch.

The bottom of the laptop is less sturdy than the lid, but the plastic bottom does serve a purpose: after more than several hours of use, I didn't feel any heat emanating from the unit. The same cannot be said about the aluminum bottom of the MacBook Pro.

The 15.6-inch, Full HD (FHD) – that's 1,920 x 1,080 pixels – 10-point multitouch display is quite vibrant. Colors are bright and detailed, and the added width and height will ensure that you don't regret going with a smaller model. Although navigating a 15.6-inch touchscreen can be burdensome at times, the DragonTrail display was super-responsive and incredibly accurate.

The spill resistant keyboard sports Lenovo's signature AccuType curved keys, of which I'm not a fan. Nor am I too fond of the three buttons at the top of the clickpad, which – as I've noted in other reviews – just get in my way. As I experienced with the Lenovo Yoga ThinkPad 12, the clickpad is the perfect size, it's incredibly smooth and I found it to be accurate right out of the box.

The added number pad, which can't be found on smaller ThinkPad Yoga units, is a coup for business users who are forced to input heavy amounts of data throughout the day.

Next Page Specs and performance