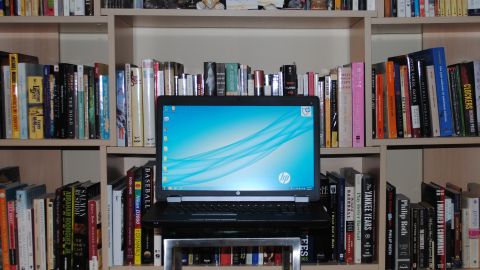 So herein lies the rub: the HP ZBook 17 G2 is only going to give you two hours and 15 minutes of battery life, according to PCMark 8 testing. I was able to squeak out three hours and one minute of WarThunder gameplay with no other programs running, but even that pales in comparison to the ZBook's competitors.

The Lenovo W540's battery last three hours and seven minutes during the PCMark 8 battery test, and our reviewer was able to run the machine for four hours and nine minutes without over-exerting it.

The Dell M6800 was able to crank out two hours and 35 minutes of battery life during PC Mark 8 testing, which is just slightly better than the ZBook.

So the moral of the story is: if you're planning on being away from a power outlet on regular occasions, you may want to consider a different device (or a different class of devices, for that matter).

The ZBook 17 G2 comes bundled with a wide variety of HP and Intel security and performance management tools, including HP's Performance Advisor. Despite the protection, I found myself bogged down by a ton of pop-ups and redirects. I ultimately wound up having to restore the machine to an earlier version in order to get it working properly again.

Running Performance Advisor didn't help, which was really disappointing and frustrating. For such a steep price, I expect these issues to be proactively defended against rather than retroactively removed from my system. Purchasers with dedicated IT departments won't have to worry about these issues. However, individual users who want a laptop that can kick butt for personal projects will have to be careful.

We've already discussed battery life and weight ad nauseum, so keep those in mind when making your purchase decision.

The HP ZBook 17 G2 is capable of more than any other workstation on the market. Its ability to process and render graphics, manage multiple programs, edit video and photos is second-to-none. It tests incredibly well compared to the leading competitors, and it's plastic and aluminum design is easy on the eyes.

Unlike some of the other mobile workstations we've reviewed, the HP ZBook 17 G2 doesn't offer more than a QHD display. It weighs as much as or more than every other business-class workstation in its class, and its ability to defend against viruses out-of-the-box is atrocious. Not to mention you won't even be able to watch a long movie without having to recharge.

The HP ZBook is one of the best laptops on the market. If you need to accomplish a task with precision and speed, there is no better device. Unfortunately, its heft, its FHD display, its awkward touchpad buttons and a susceptibility to viruses kept this machine from achieving perfection. Despite all that, compared to its top competitors, the HP ZBook 17 G2 is well-priced and well-positioned to lead the industry.