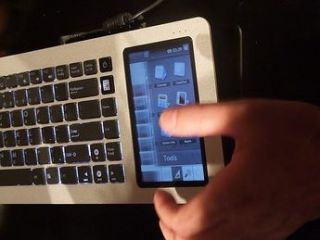 CES hasn't even officially started, but news about the latest innovations and gadgets are pouring in – with Asus quickly stealing the headlines with its touchscreen offerings.

Asus showed off its wares to the assembled press in a pre-CES conference, and it was the Eee Keyboard with integrated computer and mini touchscreen that headlined.

The concept brings the advent of the computer in every living room a whole step closer – with a contextual touchscreen allowing you to do the fiddly things that are difficult on a television on the keyboard in your lap instead.

The Eee keyboard was far from the only touchscreen offering from Asus who have embraced the Eee brand with both hands following its early netbook success.

The Asus Eee T91 is a convertible netbook/tablet PC which, whisper it, could finally make Bill Gates assertion years ago that tablets were the way forward a little closer to being realised.

Shih said that the company was looking at a 'two-pronged' approach to simple, easy-to-use devices, meaning a device that can be "put in the pocket, play MP3s, offer GPS services, works like a PDA and offers Mobile TV altogether."

Asus wasn't the only company looking to beat the rush of CES and sneak out their announcements early.

In a day when Logitech announced staffing cutbacks, it also finally unveiled its new G-series range of peripherals, including the G35 Dolby 7.1 surround-sound certified headset, the G19 keyboard and the G9x gaming mouse.

LG revealed a few details about what we're calling the world's biggest digital photo frame – a 47-inch television that can show your photos when in standby.

Apparently it consumes only 10-15 per cent of the power that watching telly does; which is still 10-15 per cent more than when you turn it off entirely of course.