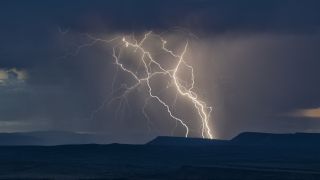 Google has admitted that one of its data centers in Belgium was hit by four consecutive lightning strikes that have resulted in the irretrievable loss of data.

The multiple bolts didn't strike the data center itself but hit the local power grid and Google explained that the problems resulted in just 0.000001% of data in the location being affected adversely.

A number of the disks hit by the strike that were originally thought to be completely lost have since become accessible and those customers that backed up their information prior to the data loss were able to recover lost data.

The Google Compute Engine (GCE) is the part of Google's Cloud Platform worse hit by the outage and it's so far unclear as to the identities of the individual clients to have been affected by the lightning strikes.

"Although automatic auxiliary systems restored power quickly, and the storage systems are designed with battery backup, some recently written data was located on storage systems which were more susceptible to power failure from extended or repeated battery drain," Google added in a statement.

Google added that it is continuing to upgrade the hardware at its data centers across the world to prevent rare issues of this nature arising again. The upgrades are likely to include the addition of Samsung's 3D NAND flash memory chips at some point in the near future following a deal signed back in April.