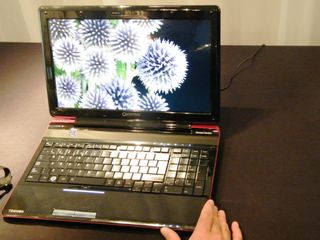 You have to be extremely quick to bag a world's first in the technology industry. No sooner had Asus announced what it thought was the world's first glasses-free 3D laptop, the G53SX, Toshiba also announce its – with the hook being that it will actually be out before Asus' effort.

The Qosmio F750 3D laptop offers up 3D without glasses and it primarily aimed at movie buffs and gamers.

Toshiba showed off the laptop to a select few technology journalists in London this week, and hailed it as "the evolution of 3D".

Toshiba is not stranger to glasses-free 3D. It has released the first TV panel of its type on the market in Japan, the Regza 20GL1, which offers nine different points from where you can view the image from. While this is far from perfect, it is a big and bold step in the direction 3D has to go if it is to ever go truly mainstream.

The Qosmio F750 3D does things differently. It uses a lenticular lens sheet as a panel and this is how it can offer the 3D without glasses.

The real hook, though, is that it uses the webcam on the laptop to track your eyes, so wherever your eyes go, the 3D image is meant to follow. This technology was seen in a demo at CES 2011.

In our tests with the Qosmio F750 3D – and bearing in mind this was a pre-production model – the tracking seemed to work pretty well but there are a few caveats to using the laptop.

As the 3D tracks your eyes and your eyes only, this is a one-person affair. Given that the screen is 15.6 inches, you wouldn't exactly have many bodies crowded round the thing, but it is worth bearing this in mind.

When we tried out the laptop, we were shown two types of media: a still 3D image of some flowers and a 2D-3D version of a DVD. The picture offered the best 3D illusion. Colours were vibrant and the image definitely 'popped' from the screen.

The converted footage wasn't quite as impressive. Although we were impressed with the lack of judder – the laptop has a 120Hz refresh rate to minimise this – the 3D effect felt a touch shallow. As this is a pre-production model we can't say if this is what you will see when shop bought but it was in keeping with most converted 3D footage we have seen.

The eye-tracking on the webcam, does work well though. This technology was introduced earlier in the year with the company's television range.

It is worth noting that while Toshiba has added a 3D Blu-ray drive to the Qosmio F750 3D, so you can watch 3D Blu-ray content on the laptop. You can also pipe this through the laptop's HDMI slot and into a big-screen TV.

Drifting away from the 3D capabilities of the laptop, there are a number of powerful features.

Another key feature is the Qosmio F750 3D's Blu-ray XL drive. This is definitely one for the storage nuts, as it allows you to write content to the most capacious of Blu-ray recordable discs.

Toshiba has also made some tweaks with the 3D technology so you will be able to work on 2D documents, while also watching 3D content. This may sound like it is enough for your eyes to turn against you but the idea you can work with 2D and 3D content is certainly an intriguing one.