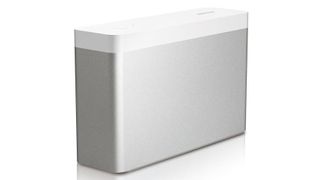 Buffalo has added a nippy new external storage drive to its herd that's capable of copying 800MB of data in 1.3 seconds.

Pry open the company's new DriveStation Mini Thunderbolt SSD and you would find not one, but two 2.5-inch SSDs toting a SATA III 6Gb/s interface tucked away inside. That's alongside two Thunderbolt ports that, when used together, can provide read/write speeds of around 615MB/s and 760MB/s respectively, according to Buffalo.

According to Buffalo, you'll be able to squeeze even more performance out of the drive (in addition to increasing capacity) by daisy chaining it with up to six other drives. It'll also do RAID when paired with a capable host.

Buffalo's drive has been specifically outed for Macs this time around due to the ubiquity of Thunderbolt on Apple's computers. But don't fret, PC users, as Intel's recently-launched 'Thunderbolt Ready Upgrade Program', shows that the chipmaker doesn't want Mac users to have all the high-speed fun and that we could see similar Windows-compatible devices soon.