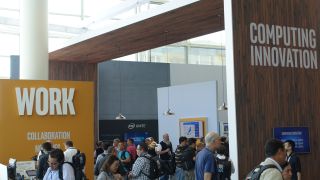 Skylake has been the talk of the town since it was unveiled two weeks ago. Today, at Intel's developer's conference, IDF 2015, the chip's manufacturer provided additional details about the processor's 14nm architecture.

By leveraging a wider core than its predecessors, Skylake is designed to provide smarter instructions for each intended processing action, as well as improved energy efficiency. The chip, although featuring a wider core, will be smaller than previous Broadwell and Haswell processors, which will help Intel sell it to manufacturers as a processor for wearables and other small form factor computers.

When overclocked, Skylake broke seven world records and was able to achieve speeds of 6.8 GHz quad-core, with DDR4 data-reading at 4,795MT per second and a base clock rate of 552 MHz.

What else can it do?

The chip is also being marketed to help boost display output and energy performance, as well as image signal processing on cameras. Intel claims Skylake can power a 13 megapixel camera with zero shutterlag, and record up to 2160 resolution video from four cameras with two running simultaneously.

Additionally, the Skylake chip offers enhanced graphics performance by leveraging embedded dynamic random access memory (eDRAM) and up to OpenGL 4.4 APIs. On Skylake, eDRAM is called eDRAM+, and this memory will serve as a cache for both the CPU and GPU. This will help bring improved performance to general computing tasks and not just gaming.

Skylake can also be used to drive video output to multiple displays, even on mobile form factors. In a gaming demonstration, Kirk Skaugen, Intel Client Computing Group Senior Vice President and General Manager, said that even a slim device, like a prototype Microsoft Surface Pro tablet, can drive up three 4K displays at 60 frames per second.

However, when asked about specific details about Skylake, Julius Mandelblat, Senior Principle Engineer at Intel declined to comment, noting that "today is not the launch of Skylake." The chip won't come for another couple of weeks, according to another Intel official in the room.

This will help PCs resume more quickly and perform better when in a power-saving state, features both beneficial to notebook users.

Intel did not provide details on what kind of battery life gains you can expect from Skylake over the current Fifth Generation Broadwell architecture during the IDF session. Likely, these details will arrive when the chip launches officially.

The second extension is the Memory Protection Extension, or MPX, which can "help identify errant pointer usage prior to release as well as mitigate exposure at runtime."