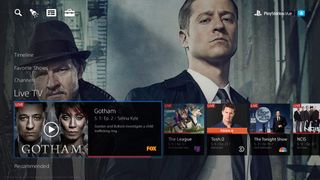 Sony is launching a cloud TV service called PlayStation Vue, and users in certain cities are going to get access to it very soon.

Vue, which is releasing widely on PS4, PS3 and iPads later this year, will launch in the next two weeks in New York, Chicago and Philadelphia, Sony Computer Entertainment President Andrew House told The Wall Street Journal.

The launch will begin in those cities with invitation-only tests before Vue rolls out to more users there.

Unfortunately there are no pricing details available yet.

We heard in January that PlayStation Vue would launch soon with access to shows from Viacom, CBS, Fox, NBC, and many others.

Currently it's scheduled only for the US, but Sony hasn't ruled out a launch elsewhere in this wide world of ours.

We reached out to Sony to find out whatever else we can about PlayStation Vue, and we'll update this article if we hear back.