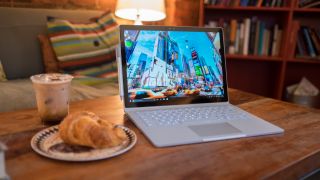 Hoping to improve upon the already-successful Windows 10, Microsoft has just released a new Windows 10 preview build one week ahead of the operating system’s (OS) first major update.

Windows 10 Insider Preview Build 10586 corrects several of the OS’s lingering issues, including one major bug that powered down Surface Pro 3 devices instead of putting them to sleep. As of the new Build, Surface Pro 3 owners should be able to hit the hybrid’s power button without completely shutting down the device.

Additionally, some Windows 10 users reported an issue in which volume in native Microsoft audio and video apps automatically reduced 75% after a pop-up notification. After the fix, audio should return to its previous volume level once the notification has ended.

Microsoft says the new Build will remember how users chose to log in using previous Windows 10 builds. For example, some users use passwords or PINs, while others prefer Windows 10’s Hello face recognition feature.

Microsoft also resolved an issue that was causing Edge Tabs and web note clippings to not appear if users hadn’t scrolled to the top of the web page.

Also appearing in the new build is a fix for small form-factor devices, like the Dell Venue 8 Pro, that were experiencing issues booting up. With the new fix, the smaller devices set to rotation or virtual mode won’t experience bluescreen after updating Windows 10.

It’s very possible that Build 10586 could be the final preview build before Microsoft’s first major Windows 10 update gets pushed to its more than 120 million users next week.

It’s expected that Threshold 2 will be unveiled on November 10 as part of Microsoft’s Patch Tuesday update.

As with any other software update, Threshold 2 should improve upon some of the major issues Windows 10 users have encountered in the more than three months since the original version of the operating system went live. These issues include major display and start-up issues with new Surface devices, as well as upgrade issues that cause computers to crash or automatically restart when the operating system is booted up.