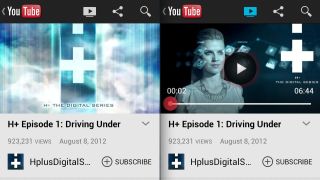 Take it from mobile to TV

YouTube viewers eager for a quick way to watch online videos in their living rooms can now do so thanks to an updated YouTube app for Android and Google TV.

Google is rolling out a YouTube app update today that lets users choose which video they want to watch through the app on their smartphones and tablets, then play the video on their TV screens.

A TV icon appears on the video selected through the YouTube app and, once selected, streams that video to a Google TV.

There's plans to bring the feature to more devices and screens down the road.

The update also transforms mobile devices into remote controls, letting users pause, scroll or skip to the next video as it plays on the TV.

Because everything is connected in the cloud, viewers can jump to the next video through their tablets or hop around the web on their phones while the video continues to play on the TV.

Multiple devices can hook up to the TV, too, so family, friends and housemates can add their vids to the playlist.

While all this is well and good for Google (and its users) it points to perhaps the penultimate if not final nail in the coffin for the Nexus Q experiment.

This app update basically offers the same services the Q promised to bring - yet without a piece of wonky hardware.

The Q, marketed as a sort of entertainment hub, ran into quality problems when users (like TechRadar's reviewer) tried to transfer videos from a device like the Nexus 7 (where the images looked great) to a TV (where the moving pictures lost significant quality).

It wasn't a Google TV - which may have been part of the reason Google has switched gears to the YouTube app.

Now, interested parties have to purchase a Google TV in order to take advantage of the app, a much more straight-forward proposition than the Nexus Q, and one that will make Google money.