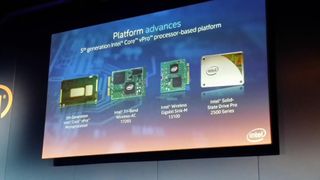 The idea is that employees can shuffle into conference rooms and instantly begin collaborating and working on ideas without wasting time trying to locate physical cables and dongles. Combined with Wi-Dock, a wireless docking feature in vPro that sees users' laptops or tablets instantly connect to displays when sat within range, Intel reckons the small time savings accumulated could lead to increased productivity over time and larger profits as a result.

Intel has said that businesses and education authorities need to buy a WiDi Pro dongle adapter to slot into the HDMI port of the TV, PC monitor or projector and receive the image from vPro-enabled devices. Actiontec, the chipmaker's main lead WiDi Pro partner, is the first to launch an adapter and will be followed by OEMs later this year.

Jim Russell: Intel The Wi-Dock is geared toward office environments and fairly short distances, so it's about huge speed but more for one person in their office. The Pro WiDi is meant for conference rooms with people at greater differences.

You can go around 30 metres and still be connected to it. WiDi also allows multi-connect with up to 16 people connected, and you can transition between different presenters. It's really more meant for collaborative environments -- a no-wire solution for the conference room, where as the WiDock is a no-more wires solution for the office. People will already be familiar with WiDi as it allows you to extend or mirror your desktop content exactly as you would in Windows 8.1.

TRP: What wireless frequency band and channel does the Actiontec adapter run on?

JR: The adapter runs on the 5GHz and 2.4GHz bands. Channel assignment is done by IT — it's not up to the individual to configure infrastructure — it's designed to be invisible to the user. When you buy it, it comes with the default channel. IT needs to configure the channel and its name — so you would put a conference room like room 101 or room 102. It helps not to put something cryptic.

TRP: How will workforces be able to manage multiple devices?

JT: Remote management is a key feature that Actiontec has built into these devices. We've enabled a CMS — Central Management System —- that allows IT administrators to see every deployed device. They can set security and management policies and turn on and off different Pro WiDi features — such as being able to push firmware updates and set custom splash screens and images from a central location. For large deployments devices can be managed through a central systems.

TRP: How will Actiontec's WiDi adapter be sold into organisations?

JT: In a number of a different ways. For example, if you look to Toshiba, Dell or Lenovo, they're selling our branded adapter through their online stores. Some manufacturers may do a bundle, so for every 10 devices you buy you may get a free adapter. It's all about the solution, and understanding the needs of the consumer -- the customer in this particular case. Businesses don't have to go through an OEM to get it -- they can get it through a reseller, system integrator or whoever they want to do the integration.

TRP: Companies other than Actiontec will be selling devices soon. Are there any requirements for what they must do to support WiDi?

JT: Other adapters have to meet certain requirements and have an opportunity to differentiate. Actiontec is Intel's lead partner having helped develop the technology. We've overseen aspects such as performance and reliability, and have done a ton of testing on HP, Dell and any other systems we can get our hands on to ensure the greatest range of flexibility to make sure these things just work.

There's an enormous amount of engineering work takes place, and then we work with Intel on the business side, working with sales organisations and distribution channels.