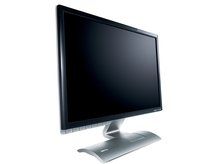 BenQ's latest range monitors have only just arrived, but the firm has told TechRadar that it is already planning a 16:9 version of its flagship 2400W monitor.

For those that get lost amid the names of products – that's the asymmetrically designed panel that impressed us earlier in the year.

"Absolutely we are trying looking to make a 16:9 version of the 2400W," European business manager for screens Thomas Muller told TechRadar.

"In fact it will be arriving in Q2 next year."

BenQ are currently making a big push for the consumer market with their 16:9 screens, insisting that the consumer is ready to move on from the more usual 16:10 monitors.

The reasoning behind this is that people's main TV screen is becoming so overused that people will be looking to plug in their Xbox to their screen or watching their HD TV on it.

Whether that turns out to be the case, or if people in fact miss that extra inch of vertical height off of their Excel, remains to be seen.

Meanwhile, Muller also confirmed that a 27in BenQ monitor was in the pipeling and should be hitting the UK next year.

"We will be bringing a 27in television in next year, but there are no plans to go bigger than that for monitors at the present time," added the BenQ man.

"We feel that 27in really blurs the line between television and monitor."