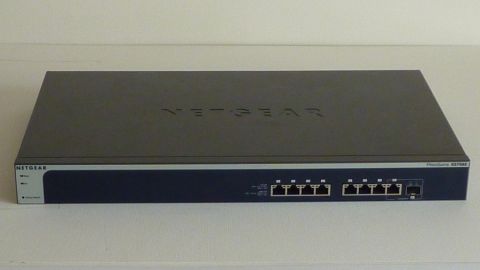 This is a superfast and relatively affordable switch, but it's a big and noisy beast.

10 Gigabit Ethernet (10GbE) has been around for years, but high prices for both adaptors and switches have so far made it only accessible for deep-pocketed enterprise users. But with the Netgear XS708E, the jump is a lot more affordable and manageable, so upgrading the most congested parts of your business network to 10GbE is now a more realistic prospect.

Gigabit Ethernet, or 1000 Base-T, has been the standard in wired networking for the last decade, replacing 100 Base-T before it. Although you can still purchase add-on PCI Gigabit Ethernet cards, practically every motherboard now has a port built into it, making life a lot easier for IT departments.

With 10GbE, it's a return to that tradition, since very few motherboards and precisely zero laptops offer the faster networking port as standard. You can find it on a select few recent high-end motherboards from companies like Supermicro, which are aimed exclusively at server use, but it's a long way from becoming universal.

The 10GbE standard has been around since 2006, with quite a menu of different copper and optical connectors to choose from. But its wide acceptance depends on how easily it can be integrated with existing systems as much as its performance, given the billions of kilometres of RJ45 Ethernet cabling already entwined in office buildings around the globe.

The high cost of replacing these means it is not an option for most companies, so compatibility with current infrastructure is key to its success.

Cabling requirements are slightly stricter than vanilla Gigabit Ethernet. Cat 6 can be used, with a maximum distance of 55m, while Cat 6a and Cat7 go up to 100m. Fibre, offered in a range of connectors including SFP, is used to connect switches over longer distances, connecting different buildings on a campus, for example. There's no speed advantage with fibre, a 10GbE connection is the same whether delivered over copper or optical cabling, but fibre is more resilient and less susceptible to interference.

While prices have fallen, there's still a huge gap between the affordability of Gigabit Ethernet and 10GbE. Upgrading every client machine in a larger office to 10GbE is prohibitively expensive, and totally unnecessary unless those systems are deployed in an environment with extremely high storage and bandwidth requirements, such as 4K media editing.

As it stands, 10GbE is now a great upgrade for the core servers on a network that come under the heaviest demand. Your mail server probably won't see a big performance improvement, but a file server definitely will, if it's under heavy load.