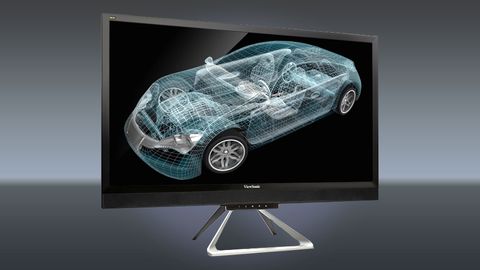 A 4K TV disguised as a PC monitor, the VX2880ml's 30Hz refresh rate limitation makes it unsuitable for gaming or doing professional work in 4K. If you're mainly planning on watching 4K video, however, it's an affordably-priced and smartly-designed, if compromised option.

The falling cost of 4K monitors has led to the first budget panels shuffling into view, and ViewSonic's VX2880ml is looking to lead the line.

4K monitors come in all different shapes and sizes, but none have looked quite like 28-inch VX2880ml. It's distinctive, for sure, thanks to a two-part stand that makes it look like it's rearing up on its hind legs. Like ViewSonic's logo (a pair of Gouldian Finch birds), the VX2880ml could be described as a bit of an animal.

ViewSonic recently said that it wanted to "bring 4K to the mainstream" with the VX2880ml, which is keenly priced at £399 (around US$623, or AUS$765). You can find it for around £40 less on various online retailers' websites, making it one of the most affordable models out there. Similarly-priced low-end models include the Acer 4k2k CB280HK, AOC U2868PQU and Dell's 24-inch P2415Q.

While setting the VX2880ml up isn't difficult, it's not a quick exercise. The stand's two parts join together using a finger rotatable screw that doesn't require a screwdriver. Once assembled, it slots into a groove in the back of the monitor and is fixed into place with another screw (a thin screwdriver is required this time).

The VX2880ml feels relatively sturdy once assembled, though its stand's three-pronged design makes susceptible to being knocked over from the left and right sides. The stand's design also means that there's no way of adjusting height without placing it on some books to raise it, nor can it pivot up and down or be rotated from side-to-side.

The VX2880ml's connections, which are located on a rear lip, aren't the most accessible due to pointing downwards, rather than straight out. The advantage of this is that the VX2880ml can be easily wall mounted and using a four-bolt VESA mount.

Around the back is Displayport, mini DisplayPort and HDMI 1.4. All three ports can be used to drive the monitor set to its native 3,840 x 2,160 pixel resolution. There's also an MHL port for displaying a mobile device's contents on the screen.

The VX2880ml's menus are operated using touch-sensitive buttons located below the monitor's bezel. Pressing the '1' button toggles the on-screen menu, while the '2' button through the various menus and input sources. While they don't beat tactile buttons, they're functional and let you quickly cycle through the various options.