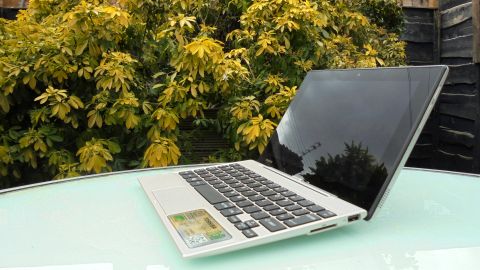 Incredible value for money with a high resolution screen and lengthy battery life. This hybrid has a few flaws, but for this price we can't linger on them for long.

They say great things come in small packages, and looking at the Satellite Click Mini we'd have to agree. Toshiba is genuinely breaking new ground with this micro laptop/touchpad hybrid. It boasts a detachable full-HD, 1920 x 1200 pixel-resolution touchscreen tablet, two batteries, Windows 8.1 and more for £250 (around $390, or AU$520) and we found it available online for even lower. It doesn't seem to be on sale in the US currently.

Firmly pitted up against the smaller Chromebooks, this thing is tiny and has all the advantages that a full Windows system can bring, such as Microsoft Office 365 (a year-long free subscription is included) and other software. This isn't just an internet browsing machine, it's a fully fledged touchscreen laptop, just shrunk... a lot.

Of course, the iPad still rules the tablet roost, but this is far more than just a tablet. It also undercuts both the iPad and Surface by a hefty margin. This is a Windows laptop/tablet hybrid with all the bells and whistles of a laptop but with a detachable keyboard and battery pack. It's also silent due to the SSD storage and fanless design.

Boasting a quad-core Intel Atom processor clocking in at 1.33GHz and 2GB of RAM, at no point did it feel sluggish. It's comparable with the Asus Transformer T100 which is showing its age, but they share the same processor. In this machine the technology has been shrunk, plus it's sturdier and better built.

The Satellite chassis is entirely plastic, but it does feel solid, almost chunky. It's quite weighty with the keyboard attached due to the dual battery layout, with one nestled in the screen unit and the other housed under the detachable keyboard.

The screen gets noticeably warm on the left side when in use or charging which can be a bit off putting in tablet mode. The tablet is reasonably thick, with an iPad-style fat bezel around it – not very pretty but it does the job.

On the tablet there's a microUSB connector which doubles as a charging port, much like in an Android phone. In our tests it didn't like all chargers, claiming they were malfunctioning USB accessories so it's probably best to stick with the one supplied. This Toshiba offering has two memory card slots, a microSD in the tablet and a standard SD slot in the base. The base also hosts a full sized USB 2.0 port – USB 3.0 would have been useful, but we're assuming this decision was made on budget constraints.

The screen features a speaker on each side, and these are not particularly loud but they're fine for watching films at home or in quieter environments. When plugged into an external speaker, an EU warning popped up reminding us to turn down the sound. This was annoying at first but can be fixed by installing another generic audio driver.

The keyboard attaches and detaches very easily via a push button in the centre. The screen slots into two metal teeth at either side and a connector. It's stable and there isn't much give in the joint when moving the screen back and forth.

When charging it'll charge the screen battery first, then the base battery afterwards – it doesn't charge both at the same time. Charging the base separately while taking out the tablet to be used would have been a handy feature. There also isn't a charging LED which one would expect on a tablet or phone, certainly on one that appears to be quite fussy over chargers.

The hinge means that the screen doesn't tilt back as far as we'd like. The shallow angle could mean that it's often easier just to detach the screen, but that means you lose the keyboard functionality as there is no wireless link between the two units.

The rear hinge sticks out a little too far when the keyboard is attached. When on a lap it can dig in after a long period of use. There has also been criticism of the keyboard bending slightly in the centre. It does bend a little, but not to any extent which affects the usage of the machine.

The keyboard itself is solidly built and the keys are a comfortable size. However, in order to fit the smaller form factor, compromises have been made, notably with the position of the keys. The E and 3 keys are usually slightly offset on a traditional keyboard, but here they're directly inline meaning you'll often hit the wrong button – not so good if you type in a lot of numbers.

The function keys are set on the A-H and Z-M keys and are activated when you push one of these keys with the FN button. It's not too much of an ordeal, but if the software you use regularly needs function keys, this may sway your decision against this model.