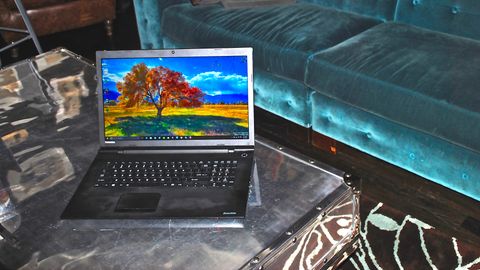 Not bad, at this price

The Satellite C won't wow you with any special powers, but if you're just trying to surf the web and write papers, this is a safe and affordable laptop.

You won't get much accomplished on a laptop like the Satellite C. It's meant for web browsing and Solitaire playing, but for students who want a way to stay connected during the school day, or to do light research in the park, the Satellite C should be able to get the job done.

Built with a brushed resin, black matte chassis that is almost identical to the Acer Chromebook 15, the Satellite C is gorgeous to look at and will improve any desk space. The chassis, which is going to be prone to fingerprints and scratches, as you can see in the photo below, is not going to survive the bumps and bruises of everyday backpacking. However, the device feels sturdy enough to withstand the internal wear and tear of chugging components.

Like the Chromebook and the IdeaPad, the Satellite L will help build up your biceps and triceps. At 4.85 pounds, this fat boy is exactly the same weight as the Acer Chromebook, but it's .07 inches (0.2cm) thinner at 0.93 inches (2.4cm). The IdeaPad is within the same bloated range at 5.1 pounds (2.3kg), so you're not skimping much heft there.

The Satellite C, like the more expensive Satellite L series, features a putrid HD screen that can be upgraded to full HD with touch control. Both laptops in this series have screens that aren't worthy of your eyes, due to awful screen glare and, in the case of the Satellite C, viewing angles that shadow within a five-foot width of the screen.

The Satellite C's screen is comparable to the IdeaPad in terms of resolution, though I'm not sure anything else HD quality could reflect so much light. On the other hand, the Chromebook, which comes standard with an incredible full HD (1,920 x 1,080 resolution) display, is a joy to view content on.

The Satellite C's TruType keyboard is unremarkable. Although it didn't give me the same trouble as the L series, which was unresponsive and sticky, I certainly wouldn't recommend this keyboard above any others on the market.

The off-center trackpad was just as inflexible as the L series model I reviewed, which made it difficult for me to determine if my scrolls and clicks had been registered.

The keyboard does not come with any backlighting, so don't plan on pulling any all-nighters under your bedcovers. Students will enjoy the number pad, which neither the Acer nor the IdeaPad offers.

The Satellite C comes standard with an AMD E-Series processor that can be upgraded to an Intel Core i5 processor. The E-Series is designed to keep power output to a minimum, so don't expect this laptop to chug along at a locomotive's pace. Unlike the standard Chromebook 15, which sports a powerful Broadwell Core i5 processor, both the Satellite C and the IdeaPad should not be expected to run many tasks at once.

Because the laptop is slated to run Windows 8.1 and Windows 10, it will feature the same nifty Cortana Quick Key as the L series model. Essentially, the key, which is located in the upper left-hand side of your keyboard, lets you summon the personal assistant application without requiring it to be in active listening mode.

Toshiba says the Satellite C is capable of running for a little more than seven hours, which is decent for a budget notebook, and blows the IdeaPad's three hours out of the water. However, the Acer Chromebook lasts more than a full school day at 8 hours and 48 minutes, according to our internal testing.

CD lovers will enjoy the Satellite's optical drive, which you won't find on many new devices these days. As I've mentioned elsewhere, I'd rather cut out the drive's added heft, but I can see it being useful in the few rare instances when content isn't available for streaming or downloading.

If you need ports, the Satellite C has you covered. It comes with one USB 3.0 port and one USB 2.0 port, an HDMI output and an SD card slot.

If you absolutely need a laptop and money is a major issue, the Toshiba Satellite C is a reasonable choice. It isn't as powerful as its twin, the Acer Chromebook 15, but it's got almost as much battery life and it looks exactly the same externally.

With upgrades to a full HD, Core i5 model with 1TB of storage this laptop probably won't ever reach best student laptop status. But this is by no means a notebook to ignore if affordability is your main concern.