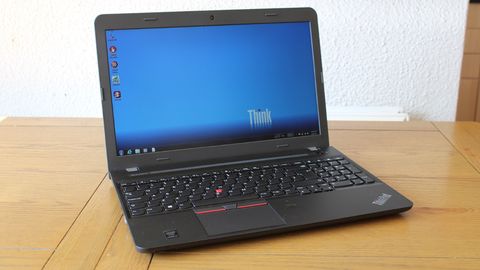 Great CPU and graphics performance for the money, an adequate display and solid build quality make the E550 surprisingly impressive.

Business-class mobile workstations aren't normally great value for money. This is especially true of Lenovo's ThinkPad line, which usually competes right at the high-end of the market, with a corresponding high cost.

The first thing you'll see when the E550 is unwrapped is a charcoal dark grey polycarbonate surface covering the lid. It has an unexpected premium quality feel to it, a really smooth texture that feels great to touch.

The chassis is made from a sturdy plastic decked out in a similar dark grey, with the distinctive ThinkPad logo in the lower right, red navigation joystick in the centre of the keyboard and three physical mouse buttons above the trackpad. To the right is a fingerprint scanner.

With a large 15.6-inch notebook chassis, there's plenty of room on the keyboard for a full-sized number pad, with shortcut keys above it for your browser, calculator, Windows Explorer and a lock switch. As with all ThinkPads the function keys running along the top of the keyboard double up as system controls, with built-in software handling various functions like screen brightness and volume, by holding the alt key.

It's not trying to be the thinnest or lightest laptop in the world. We measured a thickness of 24mm with the lid closed (with a ruler rather than quoted via the manufacturer) of which the chassis section is 18mm high. This is fairly standard for a mid-range laptop. Weight starts from 2.35kg, again fairly average.

A vent occupies almost half the space on the left-hand side, with a range of ports, including Ethernet, VGA, HDMI and a pair of USB 3.0 ports, confusingly painted black rather than the usual blue. There's a USB 2.0 port on the other side, an optical drive and the proprietary rectangular Lenovo power connector (which handily can be plugged in either way around).

The power pack itself is worth mentioning as it's a relatively straightforward compact design, with a long cable stretching to the computer, and a piece of velcro to tie it up when storing it. It takes a standard 3-pin laptop power lead.