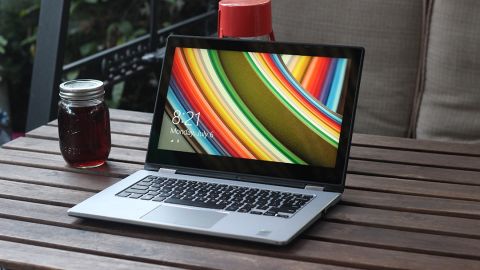 Dell's latest laptop-tablet convertible is well designed and powerful, but its battery life and weight lags behind a few key rivals.

The first time I used a convertible laptop-tablet hybrid was almost a decade ago, when I toyed around with a ThinkPad X-series tablet in my college years. While it was a cool idea, it was very much a novelty with too many compromises.

The device was heavy compared to its non-tablet ThinkPad counterparts, and its screen wasn't particularly attractive. And despite Microsoft's added stylus support to Windows XP, the user experience was clumsy at best.

Today's convertible laptops are thinner, sleeker, and more practical than ever – arguably thanks to the iPad upping the ante on tablet design. That brings us to the Dell Inspiron 13 7000 Special Edition. At first glance, you could be forgiven for thinking this is just a regular laptop. The only indication that something is different is that its hinges let you push the screen back 360 degrees.

But while today's convertible notebooks are a step up from those of a decade ago, they still come with compromises. That said, the Inspiron 13 7000 makes for a solid laptop on its own, and at $999 (about £635, AU$1,294) for the high-end Core i7 model, it makes for an excellent value. The tablet features are just icing on the cake.

Dell has a reputation of making machines that are value-packed, but not necessarily much to look at. That old perception might stand to this day, but it no longer reflects the reality: the Inspiron 13 7000 is a solidly built machine that's also easy on the eyes.

When you first pull the Inspiron 13 7000 Special Edition out of the box, you'll be greeted with a sleek, matte black lid and bottom case with a soft-touch coating. The soft-touch plastic feels good and gives the machine an added touch of class, though it does attract fingerprints.

You won't find any creaky plastic here. This laptop feels very sturdy, with no creaking or loose parts and minimal flex.

Dell opted for sturdy metal hinges on the Special Edition of this notebook, and they add to the machine's overall sturdy feel. I found it a little difficult to adjust the screen one-handed, though, as the base would simply lift up off my work surface.

The lid also flexes ever so slightly if I grab it from a corner, but despite the slight flexing, the lid feels solid overall. Magnets in the palm rest help keep the screen closed, but I found these to work a little too well. They held the lid in place so firmly that I occasionally had a hard time opening it.

Flip open the lid, and you'll find a brushed metal palmrest, complete with chamfered edges that soften the corners so they won't dig into your wrists. This notebook also features a full-sized QWERTY keyboard and a spacious multi-touch trackpad.

The Inspiron 13 7000 Special Edition's power switch resides on the right edge of the case, along with a rocker switch to adjust the volume. I'm not a huge fan of the side-mounted power switch, as it's both difficult to locate and exactly where you'd place your hand to pick up the machine. But it's a concession this convertible notebook makes in the name of versatility.

On a few occasions, I've accidentally pressed the power button with the palm of my hand, putting the computer to sleep while I was still using it. The buttons are clicky and typing feels tactile.

The right edge also houses a USB 2.0 port and an SD card slot. On the left edge, you'll find the power port, an HDMI port, two USB 3.0 ports (one of which supports PowerShare), and a headphone/microphone jack.

As a writer, I rely on an effective keyboard, and the Inspiron 13 7000 Special Edition fits the bill. The laptop uses a chiclet-style keyboard – like those you'll find on Apple's notebooks – and Dell claims that the keyboard is water-resistant. Though the keyboard holds up against small splashes, you probably won't want to spill your whole drink onto it or submerge it in water.

The keys provide sufficient tactile feedback and travel for my needs, though even a millimeter more would be a welcome improvement. The keyboard flexes ever so slightly as I type, but it requires a significant amount of force to make it bend enough for me to notice it. Unless you're intentionally pounding on it, this shouldn't be an issue for most.

The keyboard backlight offers ample illumination to type in the dark. Just as well, the lettering is printed crisply on keys, but I wonder whether the coating will wear off over time.

It's also worth noting that Dell trimmed some of the keys around the perimeter of the keyboard deck, including the backslash key, which is narrower than normal. Despite the smaller keys on the edges, though, I was able to seamlessly adjust after using my personal machine, a 13-inch MacBook Air.

A roomy trackpad provides ample room to mouse around on. The entire trackpad doubles as a button, as is all the rage these days. For more old-school users, Dell also designates a right-click area in the lower-right corner of the trackpad.

This arrangement works well for the most part, but I keep accidentally opening the right-click menus, because I can't tell where the right-click area begins just by feel.