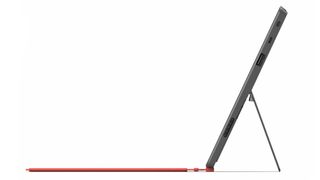 A Surface for all seasons?

Sure, the Surface RT cost a write-down worth $900 million (about £591m, AU$981m), was built too abundantly and has an existence even Microsoft seems confused by, but why not go for Round 2?

While Microsoft is staying quiet about its next slates, one chip partner confirmed today that it is indeed "working really hard" on a follow-up Surface.

In an interview with CNET, Nvidia CEO Jen-Hsun Huang said that unlike last time, the Surface 2 will have Outlook available at launch. This, he noted, should make all the difference.

"It is the killer app for Windows," Huang told the publication. "Now we're going to bring it with the second-generation Surface. We're working really hard on it, and we hope that it's going to be a big success."

Which way's the Surface?

Now, observant readers will note that Nvidia provided the processor for the Surface RT (a Tegra 3, to be exact), while the higher-end Windows 8 Surface Pro is powered by Intel.

Huang doesn't specify whether his company is working on a Surface running Windows RT or Windows 8 (or the Windows 8.1 updates of either), simply saying "the second-generation Surface," however CNET's report cites a "sequel" to the Surface RT.

We contacted Nvidia for clarification but were told the company can't comment "on rumors." However, a company spokesman told PC World that its chips aren't in the Pro, "so make of that what you will."

To crimp another crinkle, Qualcomm said in June that it will supply Snapdragon 800s for Windows 8.1 RT devices, so where Nvidia fits is murky.

With Windows 8.1 hitting consumers later this year, much should be made clear before New Years. Or at least, that's what we're hoping for.