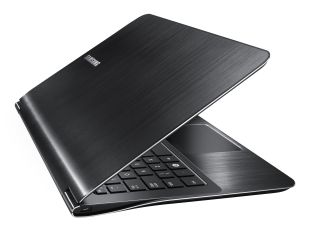 The Samsung ZX310 - made of Adamantium and shaped like a whale...or something

Samsung has unveiled its new ZX310 notebook, bringing with it high end specs in a aircraft/sports car chassis combo.

With a press release that reads more like a lads' weekend away tick-list than a notebook release, the new ZX310 is "crafted from Duralumin, a lightweight material that is twice as strong as aluminium and normally used in advanced aircraft design."

The Samsung design team promises it will be rugged enough to withstand a lifestyle both at home and on the go, but still found time to run it through a wind-tunnel to offer an "aerodynamic style and refined line design inspired by premium sports cars".

Samsung is promising a battery life up to three times faster than standard notebooks, using a SSD (up to 256GB), Intel's i5 or i7 CPU and a lithium-polymer battery, with a super-fast 12 second boot up time as well.

The screen is also top-end tech, with a 13-inch display size, a 400 nit resolution and 1,300:1 contrast ratio all making it a highly visible and vibrant display, with automatic brightness adjustment to help conserve battery further, as well as an intelligently-lit keyboard for those darker PC moments.

A 1.3MP integrated webcam and Windows 7 integration round off the spec sheet, although we haven't got anything fun like a UK release date or anything resembling UK pricing to give you at the moment. Let's say it will launch in 2012 and cost £72,000... at least that way we'll hopefully be pleasantly surprised on both fronts.