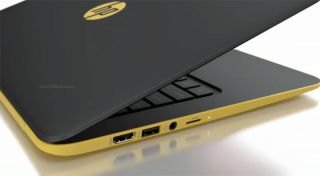 It's a PC, but don't expect to find Windows on it

Ever the shapeshifter, we've seen Android slither onto anything from smartphones to smartwatches, dual-boot tablets and even living-room-hogging 27-inch All-in-One PCs in recent years.

According to a leaked slide on HP's website that has since been taken down, the company is gearing up to offer Google's versatile OS on a 14-inch laptop called the HP SlateBook 14.

HP is pitching it as a machine made for getting the most out of your favourite Android apps, games and cloud services thanks to its notebook form factor, 14-inch full-HD touchscreen display and chiclet-style keyboard.

Of course, there's also integration with Google Now and the company's other services, which should lend it some productivity chops while serving as a general entertainment device.

The SlateBook 14 appears to be constructed of a yellow and black polycarbonate shell that echoes last year's HP Pavilion 14 Chromebook (only a little less gothic).

Specs are thin on the ground, but it'll house an Nvidia Quad-Core processor (likely a Tegra, but the strength isn't disclosed), what looks like a micro-SD card slot, three USB ports and a HDMI connector.

A footnote on the video crops up when the touchscreen display is mentioned, suggesting that it may only be available on selected models. If that's the case, it's possible that HP may be outing several models at different price points to appeal to a wider range of Android fans.