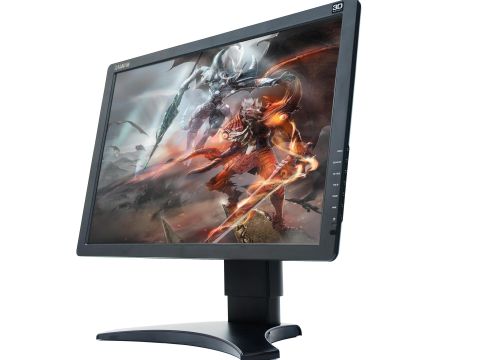 Since Sir Charles Wheatstone invented three-dimensional imagery in 1840, it's a concept that has fascinated and enthralled. However, 3D has never quite managed rocked our worlds in any meaningful way... until now. The new Zalman ZM-M220W 3D display is startlingly impressive and very addictive, so if you get one prepare to divest of at least half of your social life.

The three dimensional effect of the monitor works by transposing two slightly different images on a screen at once. The filters in front of the display then work in conjunction with a lightweight (and rather dashing) pair of polarised glasses so that only one of the images is viewed by each eye.

Then your brain meshes the images together to create a lush three dimensional effect. Thanks to the fact that all games have been rendered in 3D and videocard drivers are delivering the effect anyway, this can be viewed in almost any game. There is an extensive list of titles listed on the monitor’s 3D set-up screen and more are added regularly. These include anything from Half-Life 2 to Age of Empires.

Setting the monitor up is a time consuming process and it requires a very specific set of drivers. Currently these are only available for the 32-bit edition of Microsoft Windows Vista but they are promised for the 64-bit edition and Windows XP. It is also only compatible with the nVIDIA GeForce 5000-8000 graphics cards.

You will have to get the monitor’s height, angle and your distance absolutely right before you’ll see anything at all. Fortunately a test image is provided on continuous loop and when we got it right, we nearly fell over backwards trying to avoid the incoming nVIDIA logo.

And this is an experience that will repeat itself as you start to play the different games. To start with we launched into the opening sequence of Half-Life 2 and the 3D effect was impressive as a disembodied head burst out of the screen. Unfortunately this awe and amazement did go down several notches once we entered the game as playing a fast FPS does make your eyes water and the effect is not that noticeable. However, when we turned to World of Warcraft, the experience became unbeatable.

Flying a griffon in a three-dimensional world was an intense and almost terrifying experience. Mountains roared up from the ground and gigantic monsters looked like they did in our childhood nightmares. Even colours seemed brighter and sharper. This is what the dream of 3D is all about. Battling beasties in Warcraft can sometimes get a bit complicated though, because your mouse moves in 2D while your eyes see in 3D. But once you’ve set fire to something nasty you’ll be transfixed by the flames roaring all around you.

When you (finally) remove the glasses you also get a superb 22-inch monitor with a 1000:1 contrast ratio and all the right connectivity ports. Using the Ctrl-Tab keys you can swap between standard and 3D views as you please and the response time is satisfyingly speedy.

While you’ll thoroughly enjoy the experience of using this 3D monitor, there are some downsides. The cost isn’t ideal at £390 and even a slight shift of your eyes can turn the entire scene into a migraine-inducing blur. It’s also a devil to set-up and we’re not entirely sure that it’s good for your eyes to sit so close to the screen.

But, for now, this is certainly the best in 3D entertainment around.