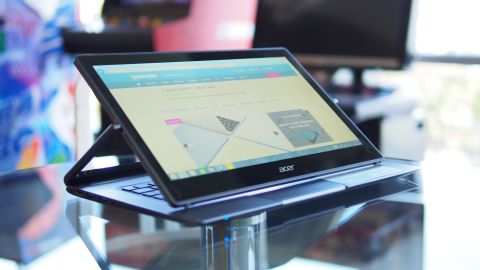 With similar power, battery life and slimness as competing Ultrabooks on the market, what makes the Aspire R13 unique is its Ezel hinge, allowing the notebook to convert into six different usage modes.

Like other PC manufacturers, Acer has been experimenting with the convertible Ultrabook form factor. That journey started with last year's Aspire R7, a multimodal laptop with an easel stand and a 15-inch display that makes it look and feel more like a transforming all-in-one desktop than a convertible notebook. This year's Aspire R13 shows Acer has been listening to user feedback in slimming its multimodal design.

These convertibles offer users the flexibility of using at least two different form factors - tablet or notebook - and the 360-degree swiveling hinges of the Spectre x360 and Yoga 3 Pro allow these hybrids to offer additional usage modes that compete with the swiveling screen on the Aspire R13.

However, given its Ultrabook heritage, the Acer Aspire R13 also competes in the traditional thin and powerful laptop category. Some strong competitors in this space include the 13-inch Apple MacBook Air, Dell XPS 13, and Asus Zenbook UX305.

Like the more traditional Aspire S7, Acer uses a glass lid on the Aspire R13, giving it a more premium design. The glass lid design was originally pioneered by HP to give a nice sheen to premium Ultrabooks and an alternative to aluminum-clad offerings. Like the Envy 14 Spectre from early 2012, the drawback is that the black glass top is a fingerprint magnet on the Aspire R13 and could make the laptop more fragile than an aluminum or plastic lid design.

With the lid closed, the Aspire R13 looks unfinished with missing parts. That's because the frame that houses the swiveling screen only covers the bottom half of the screen, leaving the top part open, unlike the full frame used on Dell's XPS 12's swiveling screen.

Coming in at 3.31 pounds (1.50kg), the Aspire R13's weight is heavier than some consumer Ultrabooks. Apple's MacBook Air with a similar screen size weighs only 2.97 pounds (1.35kg) while the MacBook Pro with Retina display comes in at 3.48 pounds (1.58kg), but has a more solid unibody aluminum construction. Dell's sleek XPS 13 is 2.8 pounds (1.27kg) with a touchscreen.

Another downside to the unique Ezel hinge is that the lid is difficult to open because there isn't much surface to grip with the open top design. Once the lid is open, you'll find the screen can be positioned in up to six different modes - two more modes than on the Lenovo Yoga 3 Pro.

You can use the Aspire R13 in Notebook, Ezel, Stand, Pad (tablet), Tent, or Display modes. Despite the number of multi-modes for the screen, it's doubtful that users will regularly use all the modes available. For example, unless I am using the optional stylus, Ezel mode is very similar to notebook mode, and I found myself mainly using the traditional notebook form factor after the novelty of the swiveling display ran out.

I found that the keyboard backlight emits an odd aqua-green hue, and it isn't bright so you'll likely find it useful only in the darkest of workspaces. Additionally, key travel is shallow, so typing doesn't feel too comfortable, despite the keys being responsive and springy.

Given the large footprint of the Aspire R13 compared to Ultrabooks with a similar display size, Acer hasn't made the most of the space available. There isn't a dedicated row of function keys, which isn't too big of a deal. The problem is that Acer moved a few of the lesser used symbol keys around on the keyboard, leading to extremely shrunken Caps Lock and Esc keys.

Although the keyboard could be improved to offer more key travel, I found the wide, clickable trackpad comfortable to use. The trackpad is sensitive and accurate, offering great cursor tracking precision.

The left side of the Aspire R13 houses two USB ports along with a full-size HDMI port, while the right side houses the memory card slot and a third USB port.

The Aspire R13 has stereo bottom-firing speakers on the undercarriage, which itself is made up of soft-touch plastic. Advertised with what Acer dubs as "cinematic surround sound," the built-in Dolby Digital Plus Home Theater speakers are crisp, even at high volumes, but lack bass, an understandable compromise given the slim body of the notebook.