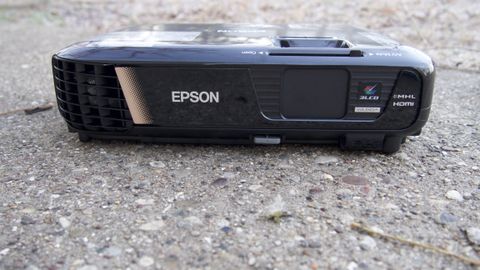 With its manageable weight and size, robust number of ports and wireless connectivity, the Epson EX9200 Pro is a compelling projector. Despite some minor audio complaints, Epson's latest offering is great for the price.

As the latest addition to Epson's EX line of projectors, the EX9200 Pro ($799, £528, AU$1,091) is an impressive option for those looking for great picture quality in light and compact projector.

The Epson EX9200 Pro is composed of a glossy black exterior with a slightly texturized top. The texture feels pretty good, and helps to cut down on potential finger smudging, not to mention providing some extra grip if you're moving the projector around. Being full black with very little flourish, it feels like the EX9200 is meant to go largely unnoticed, which is a good thing.

The top of the EX9200 Pro is where you'll find the meat of the controls for the projector. An Epson logo takes center stage in the middle, with a grid of control buttons filling out the space below. In fact, you can control nearly every facet of the projector from these buttons without the help of the included remote control. Finally, you'll also find controls for the focus and screen size in front of the Epson logo and above the lens, along with a slider for opening and closing the lens cover.

On the front of the EX9200 Pro, the lens sits recessed behind the sliding cover, flanked on the left side by another Epson logo along with some fan cutouts. Just below the lens sits a convenient little kickstand that you can use to prop the projector up a bit.

The sides of the projector are nondescript, with the right side simply featuring an intake for the fan. At the back, however, you'll find the bevy of ports you can use to cast your content to the wall.

As far as dimensions are concerned, the EX9200 is surprisingly portable given its dimensions. The projector weighs in at 5.7 pounds, which isn't exactly super light, but it's made much more bearable with the included padded carrying case. Measurements come in at 11.7 x 9.6 x 3.2 inches.

The EX9200 Pro certainly isn't lacking in connectivity options. On the back of the projector, you'll find two HDMI ports, one of which supports MHL, a VGA port, composite video and RCA audio in ports. Additionally, there are two USB ports, Type A and Type B, respectively. Finally, the EX9200 Pro sports wireless features, allowing you to push content from your laptop or mobile device over WiFi.

Below is the Epson EX9200 Pro configuration sent to techradar: