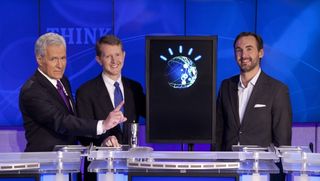 IBM is set to commercialise technology used by its Watson supercomputer

IBM has announced that it is to commercialize the storage software that was used by its Watson supercomputer to triumph on the quiz show Jeopardy!

Watson was able to respond to each question with what it determined to be the most probable answer following a few seconds during which it crunched 4 TB of data, including the full text of Wikipedia. The announcement follows previous moves by IBM to make the technology behind Watson accessible to all.

According to IBM, Elastic Storage can reduce storage costs up to 90% by moving data into more economical locations. More infrequently used data, for example, can be automatically moved to less expensive low-cost tape drives, while more frequently used data can be moved to faster, more advanced modes of storage.

The technology will allow organizations to access data from multiple different systems, without the need for modifying applications. It is also said to be infinitely scalable, feature native encryption and and allow firms to securely erase data.

Elastic Storage was developed with the vast increase in global data in mind. Some estimates place the total global data volume at 40 zettabytes by 2020. Tom Rosamilia, Senior Vice President of IBM Systems and Technology Group, said he believes that new methods of data storage and management are a necessity.

"Digital information is growing at such a rapid rate and in such dramatic volumes that traditional storage systems used to house and manage it will eventually run out of runway," said Rosamilia, in a statement. "Our technology offers the advances in speed, scalability and cost savings that clients require to operate in a world where data is the basis of competitive advantage."