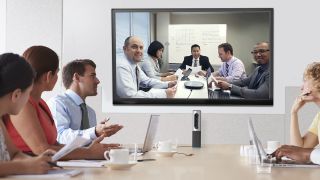 If you're a small business owner or a team of frequent travelers needing to set up an ad-hoc video call, Logitech's ConferenceCam Connect may be just the ticket. About the size of a cylindrical Bluetooth speaker, the ConferenceCam Connect is a video conferencing solution with built-in speakers, HD camera, and video output that will turn any room with a projector or HDTV into a conference room.

ConferenceCam Connect allows teams to collaborate on the road without having to huddle around a laptop to join a video call. The Logitech solution works with many unified communication platforms, including Microsoft Lync 2013, Cisco Jabber, Google Hangouts, Citirix GoToMeeting, WebEx, and Skype.

Whereas the Logitech CC3000e released last year contains separate modules for the speakerphone and the camera, the ConferenceCam Connect is a compact all-in-one solution making it more portable for travel.

The device is optimized for small workgroups of up to six people. The built-in camera offers a 90-degree field of view with Zeiss optics, up to 1080p resolution video captures, and autofocus. With the included remote control, users can use the camera's pan, tilt, and 4X digital zoom functions.

Omnidirectional microphones provide acoustic echo and noise-cancellation technology. Logitech says the built-in duplex speakerphone offers 360-degree audio so no matter where you're seated at the conference table you'll be able to hear the conversation clearly.

The device uses WiFi for screen mirroring functionality. Logitech says that Android and Windows users can use Mirrorcast to wirelessly screen-mirror presentations and other content from the mobile device to an HDTV or projector via ConferenceCam Connect. ConferenceCam Connect connects to external displays through an HDMI cable.

The rechargeable battery provides up to three hours of video conferencing use or 15 hours for speakerphone calls. The ConferenceCam Connect can also run on AC power as well if you're within range of an outlet.